Directed by Cameron Crowe
An engaging and full-tilt movie about how attention enhances both love and work.

Tom Cruise plays Jerry Maquire, a slick and self-absorbed sports agent who works for SMI (Sports Management International). He has glided through life relying on his good looks and razzle-dazzle personality. But one day Jerry looks inside and sees nothing but emptiness. He decides to write a corporate "mission statement" for SMI to put the company's emphasis on care for current clients rather than more growth. He is immediately fired.

The only person who stands by him is Dorothy (Renee Zellweger), a single parent bookkeeper who has a four-year-old son. She loves his idealism. They eventually get married. But Jerry's spiritual emergency has put him up against the wall. His only remaining client is Rod Tidwell (Cuba Gooding Jr.), a feisty wide receiver for the Arizona Cardinals. He enjoys the one-on-one camaraderie with Jerry. And he has a thing or two to teach him about love and living in the present moment.

Cameron Crowe directs this fast-paced and full-tilt movie about the spiritual practice of attention. In the end, Jerry learns that it is the necessary ingredient for a meaningful marriage and for work that matters. 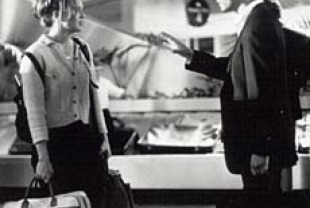