Spirit: Stallion of the Cimarron

Directed by Kelly Asbury, Lorna Cook
A fine family film about a wild stallion who overcomes obstacle after obstacle to maintain his freedom.

"Since childhood we have all had encounters with the Classic Horse. It is the horse of our dreams, fanciful and airborne, with a long flowing mane and tail. Its nostrils flare, displaying an inner spirit as magnificent as the mighty wind. It is the waves of the ocean and the fire of the setting sun. It saves us from the world. This mythic horse has marched forever through time with humans. This enduring image is a catalyst, opening us up to new horizons and teaching us about our inner feelings, the doorway to intuition. The Classic Horse rings in our psyche like a church bell; its overtones reverberate and linger, long after the bell has rung."

The horse has always been associated with freedom and power. These fleet-footed creatures move through our imaginations with the greatest of ease, unperturbed by the circumstances around them. We want to climb on their bare backs and let them carry us off into the sunset. This is the horse of western stories of adventure and conquest.

Wild horses stir our souls even more deeply. We envision them struggling to survive the ordeals of life in the wilderness. In the winter, they endure the harsh winter weather beating down on them; in the summer, they searching for food and water on sun-baked fields. We admire their pluck and ingenuity. In our minds, they race across the prairie like the wind. They rear up to fight off predators. They are loyal members of a herd and also striking examples of individual accomplishment — especially the stallions. The stallions call out our deepest respect. They are mythic.

Spirit: Stallion of the Cimarron is a lyrical and compelling animated film about the Classic Horse — wild, free, fast, and mythic. His story, highly recommended for children and your inner child, will transport you to that place where imagination meets the universal longing for freedom.

This fine family film captures the adventures of a wild stallion in the American Old West. The tale is told from Spirit’s point of view with Matt Damon handling the narration. Directed by Kelly Asbury and Lorna Cook from a screenplay by John Fusco, this animated film beautifully melds music, images of the frontier, and the movements of Spirit as his indomitable yearning for freedom is tested again and again.

Our identification with Spirit is made palpable by the songs of Bryan Adams and music by Hans Zimmer. The rock ballads provide the emotional expression of the stallion as he faces a series of ordeals that test his courage and fortitude. In A Winter’s Tale, Mark Halprin wrote: "A horse is a beautiful animal, but it is perhaps most remarkable because it moves as if it always hears music."

"In every band of horses that have run together for any length of time, a line of precedence becomes established — a precedence as clearly marked among horses as it is among the diplomats of London or Paris. What the characteristics are that establish this precedence is not always clear — age, experience, strength, fighting ability, cunning, perhaps a balanced average of all. But anyone who will observe a strange horse turned in with a crew of horses that have run together for some time, will notice that in a comparatively few days the stranger will have found his level, often with no open fighting. There is some way in which horses can take each other’s measure without actual conflict; and once that measure is established, unless man or some unusual incident upsets it, you will find that in the case of horses running undisturbed it is seldom broken."
— Charles Elliott Perkins, The Pinto Horse

Spirit is born in the rugged Old West where the land meets the sky in wide open spaces. His mother nurtures him well, and he grows up to be a most frisky explorer. In one incredible scene, the young colt encounters a herd of buffalo at a watering hole. As a grown mustang and leader of the Cimarron herd, he loves to race with an eagle flying gracefully overhead.

Spirit’s first encounter with humans is a scary one since they are men rounding up horses for the cavalry. The brave and resourceful stallion is captured and taken to a fort where a stern and power-hungry colonel (voiced by James Cromwell) is determined to break him. When all the cowboys’ efforts fail, he has Spirit tied to a post for three days without food or water. During this ordeal, Spirit recognizes an ally in Little Creek (Daniel Studi), a captured Lakota Indian who is also tied to a stake.

The two escape the fort together and find Little Creek’s nomadic community. There Spirit is taught some manners by Rain, the Indian’s pinto horse. In this relaxed and romantic interlude, we see the drastic differences between the way the Colonel and Little Creek respond to Spirit. In several Native American traditions mothers would tie the umbilical cords of their sons to the tail or mane of a horse so that her son would always be respectful and devoted to taking care of these animals.

"It is no accident that ‘horsepower’ is the Western world’s standard measure of power. A scientist will tell us that one horsepower is equal to 745.7 watts of energy — 33,000 foot-pounds of brute force — per minute. When machines first supplanted horses as the work engines of society, they often took their names from the equine vocabulary. Before the days of iron and steel, ships were sometimes called wooden horses. When trains replaced the horse-drawn vehicle for long-distance travel, they were known as iron horses, and when ferryboats came into use, the Indians could find no better metaphor for them than ‘the horses that walk on water.’ "
— Mary Midkiff in She Flies Without Wings

In the final section of this animated drama, Spirit is captured again by soldiers and taken to a camp far away where workers are constructing a railroad. The stallion senses instinctively that this machine threatens his life with the herd. His carries off an act of sabotage but has to be rescued by Little Creek. One final confrontation with the Colonel stands in the way of Spirit’s return to his life of freedom.

Spirit: Stallion of the Cimarron is an ideal film for youngsters to experience. It will arouse in them a keen sense of wonder as they watch this wild horse run with the wind. They’ll come to appreciate the talk of Spirit and others in the herd — a language of whinnies, snorts, and snickers. And they’ll marvel at these mystics with tails who are so tuned in to the subtleties of the world around them.

Best of all, children and the eternally young one inside each of us will be amazed at how horses — and the symbol of the stallion in particular — can help us realize the joys of freedom and the bounties of an untamed spirit.

The DVD includes extras that give viewers a good overview and hands-on experience with the animation process. Directors Lorna Cook and Kelly Asbury talk about how the film's animation was conceived in the audio commentary track. A storyboard to film comparison shows how drawings come alive on the screen. Our favorite extra is the fun featurette with James Baxter that shows you how to draw Spirit. For those who want to get even more into the process, there is a "Make a Movie" editing tool accessible by putting the disk in a computer's DVD-ROM drive. You can then choose from a variety of backgrounds, or import your own, and combine them with clips of the animated characters, a variety of sound effects, and music choices -- and you have your own Spirit movie! 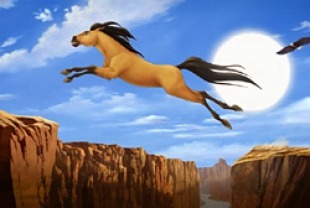 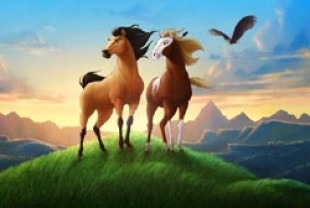 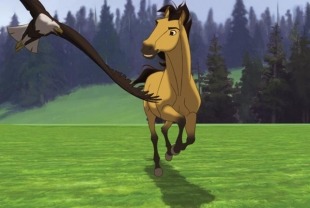 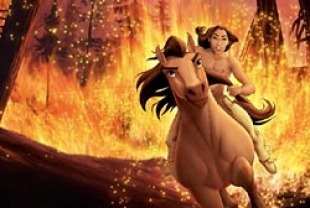