Directed by Jake Kasdan
A breezy comedy that celebrates the way we all need just the right place to nurture our creativity.

Shaun (Colin Hanks) is a laid-back high-school student in Orange County, California, who spends most of his time surfing with his buddies. After the drowning death of one of them, he finds a novel by Marcus Skinner in the sand. Suddenly the only thing on his mind is getting into Stanford University where his literary idol teaches. Everything is in place to accomplish this goal until a bumbling school counselor (Lily Tomlin) sends another student's transcript by mistake. Shaun is shattered when he gets a rejection notice from the university. However, he is still hopeful when his girlfriend Ashley (Schuyler Fisk) calls in a favor from a friend and gets a Stanford trustee (Garry Marshall) to visit his home.

Only trouble is, Shaun's family is dysfunctional to the nth degree. When the guests arrive his single parent mother (Catherine O'Hara) has had a few too many drinks and his stoner older brother Lance (Jack Black) parades around in his boxer shorts being obnoxious. Plan B involves a trip to Stanford to convince the dean of admissions (Harold Ramis) to change his decision since he didn't have the right information about Shaun. But Lance screws things up again by setting the administration building on fire. Plan C arrives as a surprise. Shaun's wealthy father (John Lithgow) realizes that he owes his ignored son a favor for being such a good kid.

Jake Kasdan directs this very funny comedy from a spiffy screenplay by Mike White. Colin Hanks puts in an appealing performance as the aspiring writer who in the midst of all the muck-ups meets and spends an evening talking with Skinner (Kevin Kline). The author and professor tells him that William Faulkner, James Joyce, and others all found just the right place to portray in their fiction. Shaun realizes that his home in Orange County is filled with interesting people and sights — enough to fill several novels. This breezy comedy celebrates the nurturing power of place in winning ways. 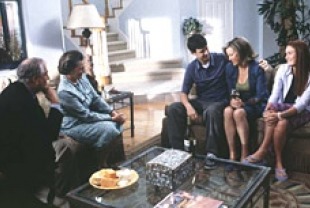