Directed by M. Night Shyamalan
A spiritual shiver story about the meaning of coincidences, family solidarity in the face of the inexplicable, and how destiny unfolds in every moment.

According to many primal societies, the storyteller must be a person possessed of acute hearing. But he listens in a different way from the tribe, and he hears different things. The Maya in the highlands of Guatemala call their wisest storyteller the "echoman." Not a bad honorific title since the best tales all have echoes that reverberate in the lives of those who hear them.

In the world of contemporary film, M. Night Shyamalan is an echoman. This very gifted and sensitive storyteller has already created a trio of spiritual movies — Wide Awake, The Sixth Sense, and Unbreakable — that touch on the intangibles at the very core of our lives. He does not shy away from the mysteries that animate our relationships to others, the Earth, and our own inner being.

With his new film Signs, Shyamalan proves once again that he is also one of the most skillful creators of "shiver stories," a term used by Clarissa Pinkola Estés in Women Who Run With Wolves to refer to tales that "make us shiver in recognition, for we have all experienced this." This spiritual thriller challenges us to ask ourselves important questions about synchronicity, the meaning of life, death, faith, and family solidarity in the face of huge inexplicable happenings that defy reason. Signs puts us is a place where we are compelled to react to a series of coincidences and a set of experiences that go beyond what we have come to think of as the ordinary or the normal. Shyamalan as echoman wants us to recognize the unfolding possibilities of destiny in each moment.

Graham Hess (Mel Gibson) lives with his young children, Morgan (Rory Culkin) and Bo (Abigail Breslin), on a Bucks County farm about forty-five miles from Philadelphia. Six months ago, his wife (Patricia Kalember) was hit by a truck and pinned to a tree. She died after saying a few final words to Graham. He was so devastated by the tragedy that he left the Episcopal ministry and since then has refused to pray. His younger brother Merrill (Joaquin Phoenix) has moved in with him and works part time at a gas station. This young man who holds the minor league home run record is still regretting the end of his brief career in baseball.

One morning the regular routines of the family are interrupted when they discover huge areas of bent-over corn stalks in their fields. At first, Graham thinks this is the work of some local pranksters. But when Officer Caroline Paski (Cherry Jones) arrives to investigate the scene, both of them begin to sense that the crop circles point to something more mysterious. What kind of machine could bend the stalks without breaking them? And how could these perfect geometric shapes have been made by hand? Then there is the strange transformation of the Hess family dog who has been barking as if at a predator. When he bares his fangs and lunges at Bo, Morgan stabs him to death. The two very brittle children are still distressed by the loss of their mother. Now they are even more unsettled.

The Hess family soon learns through television reports that other crop circles have appeared in India and England. Graham decides to take the family to town as an escape from the strange happenings on the farm. In a bookstore, the crotchety owner grows impatient over all the media attention to the crop circles phenomenon; he's convinced that the whole thing is a conspiracy fabricated by corporations to sell sodas during the commercials. Morgan is more inclined to believe the speculation that the circles are the work of extraterrestrials. He buys a book about aliens. Merrill, meanwhile, visits a milirary recruiting center where the man in charge declares that an invasion by extraterrestrials must be imminent. Back home, the scientific and always serious Morgan hooks up Bo's baby monitor as a walkie-talkie and the stunned family hears strange sounds emanating from the little box.

That night, Graham goes out to the largest circle in his field. In frustration, he cries out: "You're wasting your time here. I’m not going to report this or anything you do to my crops to the news or TV. You are not going to get famous.” Inside he finds Merrill and the children watching television reports of alien spaceships hovering over Mexico City. Morgan states that everything they wrote in science books is now obsolete with the coming of aliens.

Fearing that the end of the world is coming soon, Merrill asks his brother how he feels about what is happening. Graham responds that there are two groups of people in the world; those who believe that no matter what happens, someone will be there to watch over them. They live with hope. The second group thinks deep down that they are on their own. When confronted by inexplicable happenings, they usually are seized by fear. Both groups are trying to understand the meaning of luck.

Now the question on everyone's mind: Are the aliens hospitable or hostile? Graham receives a phone call and heads off to see his neighbor, Ray Reddy (M. Night Shyamalan), the veterinarian who feel asleep while driving home and hit Mrs. Hess. He is getting ready to flee to a lake having heard that aliens don't like water. Reddy apologizes for all the agony he caused and especially for his part in making Graham question his faith.

Meanwhile back on the farm, Merrill and the children have donned tin foil hats so the aliens won't be able to read their minds. The television reports more lights in cities and near the crop circles. The family creates their own version of their last supper but it is spoiled by Graham's refusal to say grace. Later in the tension-filled evening, he tells his two children about the wonders attending their births. Meanwhile outside, strange noises are heard as the Hesses board up the windows to their house and prepare for the worst.

Writer and director M. Night Shyamalan’s forte is to take an inexplicable happening and put it before characters just trying to go about their daily lives. This drama stays focused on Graham, Merrill, Morgan, and Bo as they respond to the crop circles, the televised reports of the extraterrestrials, and the mass hysteria about the end of the world. As viewers, we identify in turn with their skepticism, nervousness, amazement, fear, and gratitude.

Another of Shyamalan’s gifts as a filmmaker is his ability to cut to the quick of our emotions, especially those that come to the fore in the presence of experiences that go beyond the realm of the ordinary. These mysteries are significant, he tells us in all his films. Here Graham has to respond to a series of coincidences. Are they luck, chance, or fate? They certainly fit the definition of synchronicity offered by one of our favorite writers, Phil Cousineau: "an inexplicable but profoundly meaningful coincidence that stirs the soul and offers a glimpse of one's destiny.”

Another notable aspect of this deftly constructed psychological thriller is the way in which Shyamalan again depicts the spirituality of children. Bo is a clairvoyant, and Morgan has the sensitivity to understand the disequilibrium rocking his family.

Signs is a riveting thriller, and some may see it as simply that, a war of the worlds set in rural Pennsylvania. But there is more here than that superficial reading of the film. All the spiritual traditions encourage us to “see” the signs all around us that point to the possibilities unfolding in every moment in a meaningful universe. We can live a fear-based life relying only upon ourselves and what we can reasonably explain and predict. Or we can accept the helping hands phenomenon, trusting that a Great Catcher is and always will be there to sustain us and sends allies to help us when we're in dire straits.

The DVD has a longer-than-usual — one hour — “making of” documentary that covers everything from where the story came from to the creation of the special effects to the scoring of the music. There are also some deleted scenes and a piece showing the storyboards for two key scenes. A cute bonus is a one-minute piece that is billed as director M. Night Shymalan’s first film about aliens. 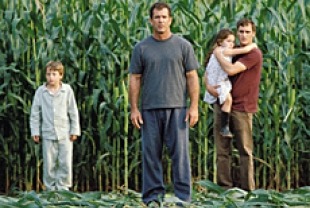 Read our reflections on Faith in Signs