Directed by Raja Amari
An ebullient Tunisian film about the startling transformation of a tradition-bound widow when she is drawn into the exotic world of belly dancing.

Lilia (Hiam Abbass) is a bored Tunisian widow with a very pretty teenage daughter Salma (Hend El Fahem) who is ready to leave home. She spends most of her time cleaning their small apartment, sewing, and watching television. When Lilia visits her daughter's dancing class, she sees that the girl is interested in Chokri (Maher Kamoun), a musician. Salma has told him that her mother is very strict and that she even talks to the picture of her deceased husband. A very nosy neighbor counsels Lilia to keep careful watch over her daughter. Of course, in this Arab society women are not even supposed to be out alone at night.

One evening, Lilia follows Chokri and discovers that he is also a musician at a cabaret featuring belly dancers. Intrigued, she wanders into the place but collapses after being bedazzled by all the action and exhilaration of the place. Folla (Monia Hichri), who has been dancing there for 15 years, takes Lilia under her wing. Soon this lonely widow is hooked on the atmosphere of the cabaret with the lively music, the enthusiasm of the male patrons, and the whirl of activity. When Lilia dons a costume one evening just to see how she looks, Folla takes her out in front of the audience to dance. It turns out that she has a natural gift for belly dancing.

In her debut as a feature film director Raja Amari has drawn out an intense and convincing performance from Hiam Abbass as Lilia, a lost and lonely soul who blooms once she steps into the exotic and forbidden world of belly dancing. Chokri can't keep his eyes off of her and they eventually get together for an evening of passionate love-making. But he still intends to marry Salma. The eventual discovery that the two women are mother and daughter makes for a lightly humorous scene.

It is fascinating to watch Lilia's startling transformation from being a tradition-bound widow into a fiery belly-dancer in a cabaret. She sheds her melancholy and shakes her past away in the blink of an eye.

The DVD features an interview with director Raja Amari and production notes on the origin of belly dancing. 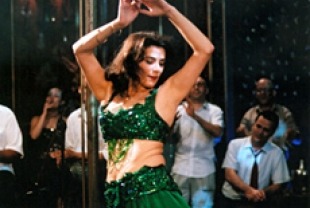