Directed by Tim Burton
An idiosyncratic portrait of an oddball whose enthusiasm for making movies is endearing.

Ed Wood is another wonderfully idiosyncratic film about an outsider and maverick from writer and director Tim Burton.

The focus here is upon Ed Wood (Johnny Depp), a transvestite director. His 1950s Hollywood career is given a boost when he befriends Bela Lugosi (Martin Landau's Academy Award-winning performance), the actor who starred in Dracula. Wood earns our affection by his loving treatment of this over-the-hill, drug-addicted actor.

But most endearing of all is this director's enthusiasm for making movies — even if they turn out to be tacky and terrible. The word enthusiasm means literally "one with the energy of God (or the divine)." There are only a few fortunate people who can muster the stamina to fulfill their heart's desire. Tim Burton's touching comic film pays tribute to Ed Wood's inimitable enthusiasm.

The DVD includes some interesting and fun extras: a behind-the-scenes featurette hosted by Johnny Depp; a featurette on the creation of the Bela Lugosi character with Martin Landau and makeup designer Rick Baker; another piece on the look of the film; plus an audio commentary with director Tim Burton, actor Martin Landau, co-writers Scott Alexander and Larry Karaszewski, director of photography Stefan Czapsky, and costume designer Colleen Atwood. 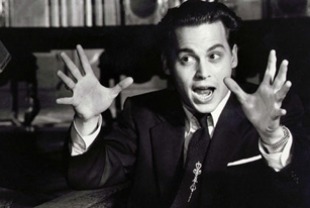