Directed by Mike Gabriel
A heroine whose soul and spirit are worth emulating.

Three cheers for Pocahontas, Disney's 33rd animated feature. The heroine in this love story set in Virginia in 1607 is a Powatan princess whose father wants her to marry a fierce warrior she finds too serious. A dream about a spinning arrow leads Pocahontas to believe it is her destiny to meet another man. She does.

Captain John Smith (voiced by Mel Gibson) arrives with a band of English adventurers led by Governor Winthrop, a greedy man in search of gold. Pocahontas, accompanied by a frolicsome raccoon and a pesky hummingbird, introduces Smith to Grandmother Willow, a mystical tree spirit, and shares with him her love for the natural world.

The filmmakers have created a heroine whose soul and spirit are worth emulating. She is a caretaker, a dream weaver, and — at just the right moment — a peacemaker. The breadth and depth of her Native American spirituality is beautifully conveyed in the best song of the film, "Colors of the Wind."

10th Anniversary Edition DVD includes 2 versions of the film: the original theatrical release, and a version with the song "If I Never Knew You" performed by Mel Gibson and integrated seamlessly into the film. Other features include deleted scenes, an all-new "Follow Your Heart" Set-Top Game, Disney's Art Project: Build a Drum and Create a Dreamcatcher, Sing Along Songs, Multi-Language Reel, and a documentary on the making of the film. 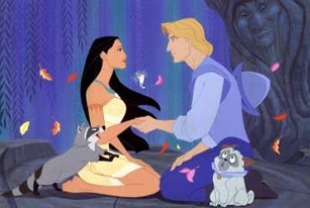