Directed by James Ivory
Covers ten turbulent years in the life of this major luminary of 20th century art.

Surviving Picasso covers ten turbulent years, 1943 - 1953, in the life of the major luminary of 20th-century art during which he lived with Francoise (Natascha McElhone), an art student who bore him two children. He was in his 60s at the time; she was 23.

Based upon the controversial biography "Picasso: Creator and Destroyer" by Arianna Stassinopoulos, this film directed by James Ivory portrays the multi-media artist (Anthony Hopkins) as an imperious male chauvinist who manipulated, abused, and humiliated the women in his life. They include Olga (Jane Lapotaire), his first wife who turned psychotic; Marie Therese Walter (Susannah Harker), his dependent and adoring mistress and mother of his daughter Maya; Dora Maar (Julianne Moore), another mistress who first attracted him by jabbing a knife between her fingers into the wood of a table and drawing blood; and Jacqueline Roque (Diane Venora), who became Picasso's second wife.

In the film, Picasso calls himself a Minotaur, half man and half beast. That is certainly how he comes across in this biodrama. In one scene, Francoise recalls that one of Picasso's favorite memories was of the time when two mistresses fought over him while he towered above painting "Guernica." In another scene, he files the trimmings of his hair away in an envelope lest anyone use them against him. And in a most odious sequence, Picasso, a tyrant in his own kingdom, is saluted by the Communist Party for his allegiance to their cause and the politics of Joseph Stalin. 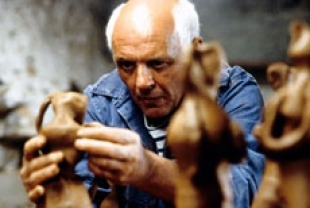