Directed by Michael Apted
A mystery story set on an Oglala Indian reservation that enables us to ponder the validity of both the seen and the unseen powers in this world.

Thunderheart revolves around a part-Indian FBI agent (Val Kilmer) who is sent from Washington, D.C., to investigate the murder of an Oglala Sioux in the Badlands of South Dakota. His attitudes and roots are challenged by a tribal policeman (Graham Greene) who is conducting his own investigation.

The turning point in the case, and more importantly in Ray's life, comes when a medicine man tells him that he's been summoned to the Badlands by the spirits of the Ghost Dance. Shortly afterwards, Ray has a vision. Despite his rationality, he can't shake off what he's seen and felt. The mysterious forces working him over are as real as the clues he finds in the murder case. Ray's spiritual journey helps him discover where he's come from and where his Native American ancestors have been. Thunderheart's greatest accomplishment is that it celebrates the validity of both the seen and the unseen powers in this world. 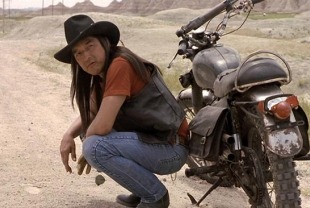 R - language, some areas of violence