The Trip to Bountiful

Directed by Peter Masterson
Revolves around the yearning an elderly woman has to visit the farmstead where she grew up and raised her own family.

Carrie Watts (Geraldine Page) is an elderly widow who lives in a rundown and cramped Houston apartment with her hard-luck middle-aged son Ludie (John Heard) and his bossy and vain wife Jessie (Carlin Glynn). The year is 1947, and it has not been a good year for this family.

Ludie feels guilty about not having earned enough money to live in a better place. Jessie can't abide her mother-in-law's hymn singing or her constant pouting when she is criticized. Carrie dreams of visiting Bountiful, the Gulf Coast town where she grew up and raised her own family. She hasn't been back to the farmstead for 20 years.

Despite her pleas, Carrie realizes that Ludie will never take her home again. So with her pension check, she heads off to the bus depot. Thanks to the kindness of strangers, her odyssey isn't a total tragedy. On the bus, she is befriended by Thelma (Rebecca DeMornay), a young soldier's wife; a helpful stationmaster (Kevin Cooney) tracks down the purse she left on the bus; and a considerate sheriff (Richard Bradford) drives Carrie to the old farmstead, which is now rundown and overgrown with weeds.

Eventually, Ludie and Jessie arrive to retrieve Carrie. By then, she has made her peace with the land, retraced some of her fondest memories, and come to the conclusion, "When you've outlived your house and your family, you've lived too long." The trip's dividend is that Carrie, Ludie, and Jessie realize they must all be more tolerant and understanding of each other. The land is played out in Bountiful but not the love that binds these three together.

This film is based on a 1953 teleplay by Horton Foote, who wrote the screenplay for Tender Mercies and 1918. As in those films, the accent here is upon character development and the manifold ways in which people cope with love, faith, hope, death, loss, and disappointment. The Trip to Bountiful is a journey of the heart worth taking. 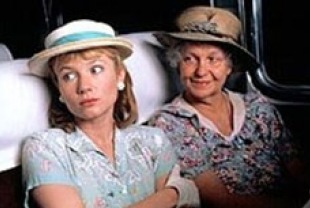