This stylized screen portrait of Saint Therese of Lisieux (1873-1897), later to be known as the Little Flower of Jesus, is an extraordinary film as a work of art and as a meditation on spirituality. Catherine Mouchet plays this teenager who wants to dedicate her life to Jesus. Although Therese's parish priest does not think she should enter the Carmelite order at such a young age — especially when her two young sisters are already there, this spunky youth convinces the Pope to intercede for her.

In a series of vignettes, photographed exquisitely by Philippe Rousselot, Therese adapts herself to the rhythms and rituals of convent life — prayers, periods of silence, mortifications of the flesh, the joys and the humiliations of communal living, sexual undercurrents, and the eccentricities of the mother superior and other sisters.

Therese's radiant and deep love for Jesus is tested in her grim battle against tuberculosis. She remains true to him. The purity and simplicity of this saint's life are dramatically conveyed by the beauty and clarity of director Alain Cavalier's cinema craft. 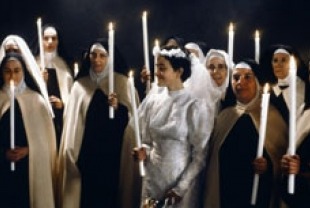