Directed by John Irvin
A small, idiosyncratic uplifting movie about two people who try to change their lives though an adventuresome project.

William Snow (Ben Kingsley) works as a clerk in a London bookstore. Middle-aged and divorced, he lives in a dreary boardinghouse. Now he is spending more and more time at the London Zoo watching the large sea turtles in the aquarium. They are constantly on his mind, and he doesn't know quite what to make of this.

Neaera Duncan (Glenda Jackson) is a best-selling author and illustrator of children's books who feels a bit burned out after years in the business. She finds herself drawn to long sessions watching the sea turtles at the London Zoo. She notices a rather intense man who seems to share her interest in them. But instead of pursuing him, Neaera purchases a water beetle and an aquarium, intending to use this as the focus of a new story. Certainly she yearns for something new in her solitary life.

William talks to George (Michael Gambon), a keeper at the zoo. He wonders what would happen if a "turtle freak" tried to release the large animals. George lays out the logistics of transporting the turtles. William reveals he wants to give them a chance to swim home to Ascension Island in the South Atlantic. Much to his surprise, George thinks the idea is wonderful. He even volunteers to help.

Meanwhile, Neaera intuits that William is planning something for the turtles. She comes to the bookstore and later at lunch tells him she wants to participate. William rents a van and builds crates for the rescue effort. At the zoo, George moves the turtles out of the tank for, what he tells a co-worker, is a needed holiday. Neaera recovers from a bad dream about the sea and packs a few things for the 250-mile drive to the ocean. Soon William and Neaera are on the road with crates full of sea turtles — and things will never be the same for either of them again.

John Irvin directs this quirky screen adaptation of Russell Hoban's 1975 novel with just the right mixture of humor and poignancy. The minimalist screenplay by Harold Pinter gives the viewer plenty of opportunity to fill in the changes and the challenges wrought in the lives of William and Neaera as they "bum a ride on the turtles." Turtle Diary is a small, idiosyncratic, and uplifting movie, which packs a strong emotional wallop. 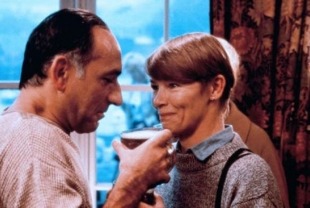