City by the Sea

Directed by Michael Caton-Jones
An intense and satisfying drama about the release of guilt, pain, and suffering in the reconciliation between a father and son who have been alienated from each other for 14 years.

Soon after the birth of his first child, New Yorker essayist E. B. White said to a friend: "I feel the mixed pride and oppression of fatherhood in the very base of my spine." This role in life elicits the same ambivalence in many men — especially those who have not yet come to terms with the hurts inflicted by their fathers. Rather than deal with the ruins of the past, these men retreat into their work, still carrying their wounds inside. By middle age, the deep sense of loss and sadness has seeped out and seems to have etched itself upon their faces. City by the Sea deals with this masculine drama. The screenplay by Ken Hixon is based on the article "Mark of a Murderer" by Michael McAlary about a cop and his wayward son.

In Long Beach, a once prosperous beach town in New York, Joey (James Franco) is a drug addict who is desperate to get his next heroin high. A visit to his disappointed mother, Maggie(Patti Lupone), only brings them both down to deeper depression about his vow to give up his addiction and recapture the happy times they had together on vacation in Key West, Florida. After getting some heroin from Snake (Brian Tarantina), Joey gets into a fight with another dealer who attacks him with a knife. Joey reacts in self-defense and kills him. The two junkies decide to dump the body in the ocean.

When the body washes ashore, New York City cops Vincent (Robert De Niro) and his partner Reg (George Dzundza) are assigned the case. They trace the details of the crime back to Long Beach, Vincent's former stomping grounds. Meanwhile, Spyder (William Forsythe) is out to avenge the murder of his dealer buddy. He comes down hard on Snake and Gina (Eliza Dushku), Joey's old girlfriend and the mother of his baby.

When Vincent finds out that the chief suspect in the case is his son whom he hasn't seen for 14 years, a tide of emotions overtakes him. His girlfriend Michelle (Frances McDormand) senses that something is bothering Vincent and so she presses him for the truth about what is going on in his life that he's not sharing with her. In one of the most bizarre confession scenes ever put on the screen, the psychologically troubled cop unloads the story of his own father's execution for murdering an infant in a bungled kidnapping and the added complication that his own son is now believed to be a killer on his current case. Michelle is at a loss for words, overwhelmed by Vincent's incredible burden of sorrow, grief, and dismay. The ante is upped shortly afterwards when Reg is murdered, and the police are convinced that Joey did it. Then Gina drops her boy off with his grandfather Vincent and leaves the city.

Michael Caton-Jones directs this intense father-son drama which was mostly shot in Asbury Park, standing in for Long Beach. It is" My City of Ruins" as Bruce Springsteen sings on his album The Rising. The bleak setting of a former resort town mirrors the wreckage inside Vincent and Joey. Both men are tormented by father wounds that have badly damaged their self-esteem and ability to love anyone. Robert DeNiro gives a compelling performance as the good cop who is forced by circumstances beyond his control to seize the moment and reconnect with his son. Given the pain and the suffering carried by Vincent for so many years, it is touching moment when reconciliation finally unfolds.

The DVD includes an audio commentary with writer Ken Hixon and producer Matthew Baer, a short featurette in which director Michael Caton-Jones discusses the filmmaking; cast and crew film highlights; and 30 scene selections. 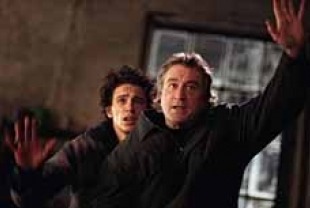 R - language, drug use, some violence