Directed by Zhang Yang
An unusual and compelling Chinese film about the loving interventions of a father and mother whose oldest son is a drug addict.

In the early 1990s, Jia Hongsheng is a fairly successful actor in Chinese movies. Then he gets hooked on drugs. His career takes a plunge, and he winds up living in an apartment paid for by his sister. When things go from bad to worse with him, his parents move back to Beijing to take care of their eldest son. To them, he seems to be living on another planet. His room is painted oddly and he listens obsessively to the Beatles. At one point, Jia tells them that his father is John Lennon. They are deeply saddened by this breach of Chinese etiquette where respect for parents is emphasized.

Jia scorns his parents' old ways and orders them about as if they were servants. He even wants his father to wear Western jeans. The two men spend afternoons sitting near a highway drinking beer and listening to music. This is the only way that Jia's diligent and patient father can insure that his wayward son isn't purchasing drugs for his habit. All of this is to no avail when Jia's addiction to heroin turns him into a monster of anger and resentment. He is eventually sent to a mental institution for rehabilitation.

Zhang Yang directs this unusual Chinese drama about drug addiction. It is based on a true story and uses the family and friends of Jia Hongsheng in the harrowing portrait of his long road to recovery. The story doesn't hold back on its criticism of the warps of Western culture where independence is emphasized and self-development leads to family problems. At the same time, Quitting is highly critical of the Chinese tradition of giving eldest sons the world on a platter while other siblings are taken for granted and even ignored. Jia Fengsen walks away with our emotions as the patient and loving father whose efforts to save his son are truly laudable. 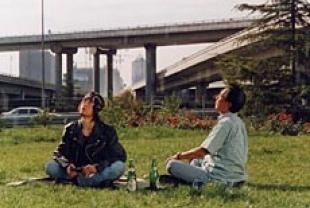