Directed by Chris Eyre
Revolves around a trickster spirit that takes hold of a serious and sensitive Native American cop and takes him for a wild and spooky ride.

Native Americans have always had a healthy respect for aspects of themselves that they would rather avoid. As an antithesis to the brave and bold tales of warriors, they told trickster tales about playful figures who did unmentionable things, were unruly and sexual, and spit in the face of tradition.

Skins, the second feature from Native American director Chris Eyre (Smoke Signals, 1998), is about what happens when a trickster spirit takes hold of a serious and self-righteous Native American and propels him on a strange and spooky ride. This incredibly fresh and engrossing drama shot on location in South Dakota on the Pine Ridge Reservation is one of the best films of 2002. Jennifer Lyne has adapted the screenplay from a 1995 novel by poet Adrian C. Louis, who was a teacher on the Oglala Sioux reservation. It’s a depressing place, the poorest county in the United States, with 75 percent unemployment, substandard living conditions, and rampant alcoholism. Those who live there have a 50 percent shorter life expectancy than other Americans.

Mogie Yellow Lodge (Nathaniel Arcand) and his younger brother Rudy (Chaske Spencer) grow up on the Pine Ridge Indian Reservation with an alcoholic father who repeatedly beats up their mother. Mogie, a star football player, takes care of his brother and is a hero figure to him. But when he comes back from Vietnam with three Purple Hearts, Mogie (Graham Greene) isn't the same person. He descends into alcoholism, spending days drinking with his buddy Verdell Weasel Tail (Gary Farmer) and nights in the local jail for disturbing the peace of the community. Often the person who locks him up is Rudy (Eric Schweig), who has become a cop. Aunt Helen (Lois Red Elk), matriarch of the Yellow Lodge, doesn't know what to do about Mogie. She knows he desperately wants to connect with his eighteen-year old son Herbie (Noah Watts) but lacks the will-power to do so.

While pursuing a teenage vandal in an abandoned house where a young man lies dead, Rudy falls down and hits his head on a rock. The trickster spirit, which he had met as a spider when he was 10 years old, suddenly takes possession of this serious young man. The dark side of his psyche manifests as a vengeance-seeking vigilante. Wearing a mask to cover his face, Rudy finds the boys who murdered the kid in the house and cracks their knees with a baseball bat. The trickster also encourages Rudy to have sex with a married woman (Michelle Thrash) and then compels him to torch a liquor store in another town that has been selling beer to Mogie and other Indians not able to purchase alcohol on the "dry" reservation. What he doesn’t realize is that his brother is on the roof of the place trying to break in to steal some beer. Mogie is badly burned, and Rudy is beside himself with guilt. He sees a local medicine man who says: "Human beings don't control anything, spirits do." He later invites Rudy to participate in a sweat lodge ceremony in order to get the trickster off his back.

Skins graphically depicts how poverty and alcoholism serve as divisive forces within families and within the community. Nearly at the end of his rope, Rudy is called to the backyard of a reservation home where Mogie's drinking buddy has gotten caught in a bear trap. The family responsible for putting this dangerous contraption in their yard try to justify this extreme measure as their only security against thieves.

After Mogie recovers from his burns, a doctor tells Rudy that his brother as cirrhosis of the liver and only a short while to live. The two brothers reach out to each other across the divide that has kept them apart for so many years. In the end, the trickster spirit helps Rudy pay tribute to Mogie's anarchistic spirit through an act of vandalism. Although some may be shocked by this image, it is an act of love that unites the brothers beyond the grave.

Skins is the kind of small movie that usually has a hard time finding a large audience. But this bold and cathartic drama set in place of great suffering and loss deserves to be experienced by those who cherish intimate dramas about individuals struggling against all odds to practice love, compassion, and forgiveness.

The DVD features an audio commentary with director Chris Eyre and a featurette called “Rolling Rez.” 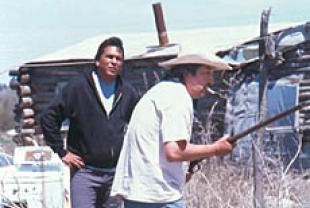