Directed by Peter Mullan
An unflinching and compelling drama about the unjust incarceration of young women in Ireland by the Catholic Church for their so-called sexual indiscretions.

In his second feature film, actor Peter Mullan (My Name Is Joe) has created an unflinching and compelling drama that will make your blood boil. Up until 1996, profit-making laundries throughout Ireland operated by the Sisters of the Magdalene Order used young women as virtual slaves. An estimated 30,000 girls went through this system, sent to Magdalene Asylums for their so-called sexual improprieties — having a child out of wedlock or being a "temptress." These poor souls were forced to work in silence seven days a week in laundries without pay. The intent of the sisters was to drive wayward souls to repentance through prayer and hard work. The asylums were named after Mary Magdalene, the prostitute who repented and was forgiven by Jesus.

The screenplay by Peter Mullan is loosely based on a Channel 4 documentary which contains interviews with some of the unlucky souls who were incarcerated in the Magdalene Asylums. In the opening scenes, three of the main characters are introduced. At a wedding, Margaret (Ann-Marie Duff) is raped by her cousin. When she tells what happened, the males at the gathering rally around the man accused, and the next day, her family and priest have her sent away to the Magdalene Asylum.

At an orphanage run by Catholics, pretty Bernadette (Nora-Jane Noone) is constantly attracting the attention of boys who linger at the gates and give her trouble. The principal agrees with the nuns that she is a temptress who poses a stumbling block to men; so in order to save them, it is decided she must be removed from their midst.

Shortly after giving birth to a child out of wedlock, Rose (Dorothy Duffy) asks her mother for forgiveness and honestly acknowledges the error she made. But her devout father and mother follow the counsel of the priest who wants to put the child up for adoption. They decide that Rose needs to pay for her sins at a Magdalene Asylum.

The three new arrivals are immediately shamed by Sister Bridget (Geraldine McEwan), the authoritarian head of the laundry. This malevolent woman is a fundamentalist who believes that these fallen women must symbolically wash away their sins and unworthiness by cleansing the clothes of others. The new arrivals also meet Crispina (Eileen Walsh), a simple-minded girl who uses her Saint Christopher Medal to commune with the young son who was taken away from her and sometimes stands at the gates of the asylum with her sister.

The harshness of the place and the rigorous use of silence as a weapon to keep the women from getting to know each other convinces Bernadette to find a way to escape. However, a young woman (Mary Murray) who ran away is brought back by her father (Peter Mullan), who beats her up in front of the women in the dormitory. Her hair is then cut off by Sister Bridget in an attempt to further degrade her. In another instance, the three new arrivals along with others are forced to stand naked in front of a nun who ridicules their body parts.

Crispina is sexually abused by a priest who gives communion to the women. Her friend comes up with a scheme to humiliate him in front of everyone. Margaret is then liberated when her brother comes to take her home with him. Meanwhile, Bernadette and Rose, more determined than ever not to spend their lives in this hellhole, plot their escape.

At one point, one of the young women asks: "What in God's name have we done to deserve this?" They were unlucky enough to have been born into a Irish theocracy emboldened by the Catholic Church. The Magadalene asylums are now closed, but the system that spawned them is anything but extinct. To this day, various Christian, Jewish and Islamic fundamentalists continue to exalt men and subjugate women on account of their fear and hatred of female sexuality and freedom.

The DVD also includes the acclaimed original documentary, "Sex in a Cold Climate," that exposed what happened at the Magdalene laundries and inspired the making of the movie. It is investigating reporting at its finest. 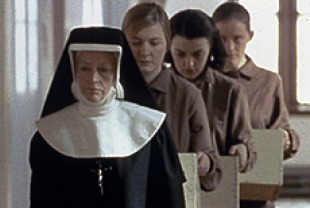