Directed by Bertrand Tavernier
A look at the French film industry during the German occupation and its most delightful moments are when various characters express their quirky inner selves.

In 1942, Paris is occupied by the Germans and the Resistance movement is active. Most French citizens are trying just to survive the war and the bombings. In the opening scene of this drama about the French film industry during hard times, Jean Aurenche (Denis Podalydes), a screenplay writer, is orchestrating the perfect evening for his mistress, stage and screen actress Suzanne Raymond (Charlotte Kady). Their festivities are interrupted by an air attack that destroys buildings around them.

In another part of the city, Jean Devaivre (Jacques Gamblin), an assistant director, and his wife Simone (Marie Desgranges) are trying to retrieve their newborn son from a municipal nursery. Although he hates the Nazis and all they stand for, he decides to work for a German film company, Continental, run by Docteur Greven (Christian Berkel). They are forced to take short-cuts in their movies and whenever the German overseers arrive on the scene, cigarettes are extinguished and silence takes over the studio. Devaivre gets his shot at directing when Maurice Tourneur (Philippe Morier-Genoud) goes into shock after learning that his wife has been arrested.

This assistant director is an energetic man. Devaivre also is part of the Resistance movement, spreading tracts and, in one instance, blowing up a train with grenades. His wife's brother is picked up by the police for carrying two tracts and sent away to an undisclosed prison. Meanwhile, a screenplay writer, Charles Spaak (Laurent Schilling), is thrown in prison where he continues to fulfill his contract by writing from a cell. When he is released, many of the scenes he has written are about food since he was starving while incarcerated.

Safe Conduct is French filmmaker Bertrand Tavernier's twentieth movie. It follows It All Starts Today, a marvelous drama that touches the heart with its warm portrait of a troubled educator. This lengthy drama is redeemed by Tavernier's human touches which pop out here and there. Perhaps the best vignette is the one recounting a surreal experience Devaivre has after stealing some papers from a high-ranking SS man. His companions in the Resistance movement hand him over to the British who fly him to England where he is interrogated by intelligence agents. Still suffering from a bad case of pneumonia, Devaivre struggles to make sense of the nightmare he finds himself in. To make matters worse, the English keep asking him to have another cup of tea. Finally, they throw up their hands in despair and send the Frenchman back to France.

The ethical tensions the assistant director experiences are far from the purview of Aurenche, the womanizing screenplay writer. He refuses to work for Continental and gets into verbal battles with war profiteers. His women provide him with shelter as he stays for a while with Olga (Marie Gillain), a prostitute, and then moves in with Reine (Maria Pirarres), a friend of Suzanne's.

Safe Conduct is a story Bertrand Tavernier felt compelled to tell, and it sheds some light on what it took to keep working in times of extreme danger, confusion, and peril. The most satisfying aspect of the film is the director's light touch and the constant pleasure he takes in small moments when individuals express their quirky inner selves. 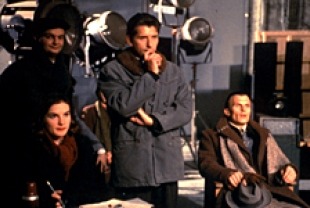