Directed by Michael Moore
A kick-out-the-jams, no-holds-barred examination of America's obsession with guns that concludes it's all about fear.

Michael Moore attacked corporate crime in his popular documentary Roger and Me. He then went on the road to look at America's warps in The Big One. Most recently, his book Stupid White Men with its hard-hitting critique of the Bush Administration is a national bestseller. Now Moore's relentless energy has brought him to a kick-out-the-jams, no-holds-barred examination of America's obsession with guns — a quarter billion of them — and the nation's propensity for violence.

It is a miracle, given the repressiveness and paranoia of the times, that Bowling For Columbine ever got made, much less that it found a company bold enough to distribute it. Moore takes social and cultural criticism into new territory with his far-out and zany portrait of America's love affair with guns and the link between individuals who solve problems by shooting others and a nation that assassinates other country's political leaders, drops bombs on innocent civilians, and threatens to decimate evil-doers with missiles and nuclear bombs.

Moore begins with his own interest in guns as a card-carrying member of the National Rifle Association — he even won a marksmanship award when he was a teenager. He goes to a bank in Michigan that offers a free gun to anyone opening a new account. He interviews some members of the state militia who are proud of the firearms they keep in their homes. One of them vehemently declares: "It is an American's responsibility to be armed." That certainly seems to be the idea behind an ordinance in Virgin, Utah, that requires all citizens to own guns. An interview with the brother of Oklahoma City bombing conspirator Terry Nichols reveals that he sleeps with a loaded 44 magnum each night under his pillow. Moore doesn't believe him until he goes into the bedroom and sees the gun for himself.

Moore wants to understand why Americans need so many guns. In Littleton, Colorado, a spokesperson from Lockheed, the manufacturer of missiles and other arms for the defense department, which employs over 5000 people in the town, is baffled as to why the kids at nearby Columbine High School would resort to violence. Moore asks him if he can see the connection between a young person whose parent makes missiles and his or her own need to use guns to solve problems. No, the spokesperson doesn't see that. Instead, he relates how Lockheed Martin made a $100,000 contribution for an anger management curriculum for the schools. Another clueless person is a home security consultant in Littleton who talks about the rise in sales for anti-theft and self-defense devices he offers and then breaks down over the shock he feels about " the indiscriminate killing" by the boys at Columbine. Moore observes that on the same day that 12 students and one teacher were shot at Columbine, American planes dropped more bombs on Kosovo than on any other day in the war.

What is the reason for the high rate of gun deaths in America in comparison with the rest of the world? Just look at these statistices. Gun deaths in Germany, 381; France, 255; Canada, l65; England, 68; Australia, 65; Japan, 39; the United States 11,127. Is it that other countries don't have as many guns, proportionally, in the hands of their citizens? Moore heads off to Canada and finds out that there are 7 million guns in 10 million households there. But these people, even those living in big cities such as Toronto, leave the doors to their homes unlocked (he tries the front doors of a number of houses to doublecheck this fact). Other countries also have media violence, multicultural societies, the breakdown of family values, and the other usual suspects. What separates the U.S. from everyone else?

It's fear, says Moore. America is a fear-based culture, and it has been that way since the inception of the nation. Moore presents a withering animated segment in which a talking bullet traces the history of America. First came the pilgrims fleeing persecution. They were afraid of the Indians, so they killed them. Then they were afraid of witches so they burned them. Then they were afraid of the British so they passed the Second Amendment, just in case the British came back after the Revolutionary War. The saga of fear continues through the invention of the spread of slavery and the growth of an unhappy slave population to the invention of the Colt 6-shooter and the creation of the National Rifle Association.

Moore moves on to a survey of alarmist reports by the media that have kept fear alive in the consciousness of citizens: the Y2K computer problem, the African killer bee outbreak, the razors in apples scare during Halloween, the summer of the shark, road rage, and the constant stories about young African American males as violent killers. A public prosecutor in Flint observes that media conditions people to think our communities are more dangerous than they are. Shock-rocker Marilyn Manson, whom many parents have tried to blame for the increased violence by youth, suggests that all this fear-mongering is part of a larger scheme: "Keep everyone afraid and they'll consume more."

The long-standing American tradition of viewing others as possible enemies contributes to the country's propensity for violence. Paranoia certainly hasn't helped prevent gun killings. Footage from the surveillance cameras in Columbine's library reveal that all that security wasn't any help when the shootings were going on. In the filmmaker's hometown of Flint, Michigan, a six-year-old killed another six-year-old after he took a gun found at home to school.

If guns are omnipresent, perhaps the solution would be to eliminate easy access to ammunition. The Columbine shooters got their bullets at Kmart. Moore and two victims of that tragedy go to the company's headquarters to ask them to quit selling handgun and assault weapon ammunition, and to their surprise the company's issues a statement saying they will do so. In the closing interview with NRA President Charlton Heston in his home, Moore hammers home why paranoia remains one of the chief causes of so much trouble in America. 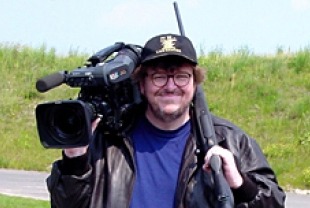