Directed by Alexander Payne
An American masterpiece about the quest of a sixty-six-year-old man to pick up the pieces of his disappointing life and to discover some new sources of love and meaning.

Warren Schmidt (Jack Nicholson) has worked for an insurance company in Omaha, Nebraska, for his whole career. At a party celebrating his retirement, his best friend Ray (Len Cariou) characterizes him as a very rich man who has reaped the internal rewards of a meaningful life and a job well done. The sixty-six year old doesn't see it that way and sneaks out of his party for a drink at the bar alone.

Helen (June Squibb), his wife of forty-two years, has big plans for retirement. She's convinced Warren to purchase a motor home so they can go on a leisurely tour of the country. But he wonders what has kept them together all these years. Helen's habits irritate Warren to no end, such as the way she cuts him off when he's talking or her obsession with always going out to new restaurants.

Bored at home, Warren stops off at his old office which is now occupied by an enthusiastic young man. He is saddened to discover that the company and his replacement are doing just fine without him. Warren next secretly signs up with Childreach to become a foster parent to Ndugu, a six-year-old African orphan. In his letters to the boy, who cannot read or write, this frustrated and very angry Midwesterner lets loose a torrent of unexpressed feelings about his wife and his life. One of the things that bugs him most is that his beloved daughter, Jeannie (Hope Davis), who works for a high tech company in Denver, is engaged to marry Randall Hertzel (Dermot Mulroney), a young man who sells waterbeds. Warren writes to Ndugu that "the guy is just not up to snuff for my little girl."

Just as Warren is beginning to make some progress on accommodating himself to retirement, Helen dies of a blood clot in the brain. Warren feels very guilty about his negative comments about her. When Jeannie arrives home with Randall for the funeral, her father tries to convince her to stay a while to help him adjust to this loss. She refuses and then criticizes him for purchasing the cheapest coffin he could find for Helen. Naturally, his pleas for her to postpone the wedding are to no avail.

Disappointed and depressed, Warren can't take care of himself or the house. When he finally does pull himself together and starts to clean things up, he finds some love letters to Helen from Ray. Warren explodes and has an angry confrontation with his best friend over this betrayal which took place years ago. Realizing that life is too short and that he cannot afford to waste another moment, Warren decides to visit some important sites from his past on the way to Denver for his daughter's wedding.

Writer and director Alexander Payne (Citizen Ruth, Election) has created an American masterpiece with this bittersweet portrait of a Midwesterner whose disappointments in life have made him into an angry man. With a tour de force performance characterized by restraint and nuance, Jack Nicholson has assured himself of an Academy Award nomination for Best Actor. This character's negative feelings about himself and the ways he has failed to live up to his youthful dreams are something many people will identify with. Payne's clever use of Warren's letters to Ndugu also universalizes the sixty-six year old's need to express the feelings he's kept inside for too many years. Hats off to the director for giving us an all too rare drama set in the Midwest. Although there are plenty of funny scenes and satirical swipes at various characters, Payne refuses to make them into caricatures.

The last segment of Warren's quest brings him into contact with a couple in a camper from Wisconsin. A married woman, in a heart-to-heart with him, sees through to his soul and comments on his sadness and anger. It is a magic moment that leads Warren to respond inappropriately to her concern. Finally arriving in Denver, he is more convinced that ever to stop his daughter's marriage. But while he is sleeping on a waterbed in Randall's room, Warren's body throws him a curve. Then when he is recuperating, Roberta Hertzel (Kathy Bates), Randall's mother, flirts with him and sends him into a tizzy.

Warren struggles mightily with his attempt to sabotage Jeannie's wedding and, in the process, comes to some honest realizations about the direction of his own life and what is of ultimate importance. The final cathartic scene in About Schmidt is a stunner that reveals the surprising healing power of love even when expressed in the most elementary ways.
The DVD edition contains nine deleted scenes, each with accompanying director’s notes. 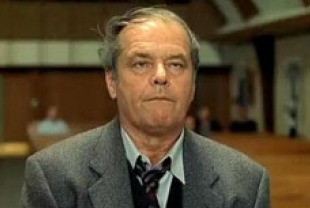 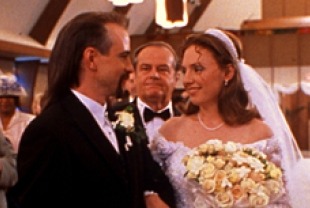