Directed by Dylan Kidd
Offers some fresh twists on the well-worn theme of sexual politics and shows how far some men still have to go to achieve emotional intelligence.

In the verbally dazzling opening scene of this acerbic drama set in New York City, Roger Swanson (Campbell Scott), an advertising copywriter, is entertaining some of his co-workers with his overview of the war between the sexes. He predicts that in the not too distant future, men will not be needed for procreation and women will find many ways to achieve orgasmic pleasure without them. While he is spinning out illustrative material to make his point, it is evident that this cocky male just loves being center stage and impressing others with his quick wit and intelligence. Only problem is that Roger doesn't have what it takes to stay in a love relationship. Shortly after the meal ends, he is dumped by Joyce (Isabella Rossellini), who just happens to be both his boss and his girlfriend. This is a big blow to his ego, and he doesn't take it well. Mercifully, his nephew Nick (Jesse Eisenberg), a sixteen-year old from Ohio, is standing in the office waiting to see him. It turns out that he just had an interview at Columbia University and wanted to say hello.

Over a meal, the earnest Midwesterner tells Roger that he's heard he is a ladies man. Could he possibly give him some advice on how to relate to women? Roger is thrilled with the chance to share his wisdom on the dating game. It is also a chance to take his mind off just being given the heave-ho by Joyce. On the busy streets of the city, Roger gives Nick a brief tutorial on staying alert to the bodies of women. " Sex is everywhere," he declares, and it is the male responsibility to be receptive to the signals women give off.

The lessons kick into high gear when the class of two moves into a bar. Soon, a few clever words by Roger has brought Andrea (Elizabeth Berkley) and Sophie (Jennifer Beals) over to their table in the corner. The women are intrigued by Nick's honesty and turned off by his uncle's crudeness and machismo machinations. After the boy is kicked out of the bar for being underage, the four sit down on some benches and talk turns to the women's first experiences of sexual intercourse. When Sophie learns that Nick is a virgin and has never been properly kissed, she demonstrates just what is involved.

Roger's nastiness eventually sends these two women fleeing. He then crashes a party being held by Joyce and tries to persuade Nick to have sex with a woman who has passed out after drinking too much. The boy just can't bring himself to take advantage of her. The evening ends with a quick visit to an underground brothel where Roger pulls his nephew out of the arms of a whore in the nick of time.

Writer and director Dylan Kidd has given us a first-rate look at the slimy values of a sex-obsessed man who has no respect for women or their feelings. Although he sees himself as a successful player in the dating game, Roger is really arrested in the adolescent stage of relating to the opposite sex as though the only things that count are appearance and scoring. Campbell Scott gives a winning performance as this lonely soul whose verbal skills are light years ahead of his interpersonal abilities. In several scenes where he tries to pick up women at bars, he criticizes them in a cruel way that he takes as honesty. Although Nick is inexperienced with women, he at least demonstrates a capacity to be sensitive to their needs and feelings. Roger Dodger offers several new twists on the well-worn theme of sexual politics and reveals just how far some men have to go to achieve emotional intelligence.

The DVD includes a deleted scene and behind-the-scenes footage, as well as two audio commentaries of director Kidd chatting with stars Campbell Scott and Jessie Eisenberg and with director of photography Joaquin Baca-Asay. There are also interviews with the film crew, producer, and studio head; a "tour" of filming locations, hosted by Eisenberg; and a guide for success with women. 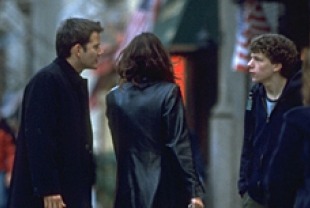