Directed by Samira Makhmalbaf
An engrossing Iranian film about two itinerant teachers and some lost and desolate people they encounter in a mountainous region where war has savaged the lives and liberties of the poor and the dispossessed.

In the mountainous country of Iranian Kurdistan, a group of itinerant teachers wend their way through a treacherous area in search of pupils. They carry their blackboards on their backs and use them as shields when they need to hide from army helicopters. One teacher, Said (Said Mohamadi), comes across an old man who wants a letter read to him from his son who is in an Iraqi jail. Another teacher, Reeboir (Bahman Ghobadi), encounters a group of boys who are stooped over from the weight of contraband goods they are carrying to the border. These hungry and harried youth have no interest in learning how to read and write. The teacher does find one of them who wants to be able to write his name. When a boy is injured, Reeboir cuts off part of his blackboard to be used as a splint for his leg. In one of the most dramatic scenes, the teenagers crawl on their hands and knees behind a herd of goats at the border. The guards open fire on them.

Meanwhile, Said goes to a village and finds no one interested in his services. He joins a caravan of elderly men who are trying to find their way back to the Iraqi border. He volunteers to help them in exchange for some nuts to eat. Eventually, his blackboard is used as a stretcher for a man who is having trouble urinating. It turns out that he has a daughter, Halaleh (Behnaz Jafari), whom he wants married before his death. She has a small son. Surprisingly, she agrees to marry Said. Later on when there is shooting at the border and they are forced to run for their lives, Halaleh's memories of being subjected to chemical warfare paralyze her with fear.

In a world of violent conflict and the brute struggle for survival, education and learning are beggars. For people who don't have enough food to eat or a warm, safe place to stay, these are luxuries that have little relevance. In her first film, The Apple, Iranian filmmaker Samira Makhmalbaf (only eighteen at the time) offered a severe critique of the way women are treated in patriarchal societies. Here she presents a meditation of the effects of war. This engrossing drama was shot near the city of Halabtcheh on the Iraqi border. During the war between Iran and Iraq (1980 - 1987) many Iraqi Kurds took refuge in Iranian Kurdistan to escape chemical warfare. Afterwards, these displaced and poverty stricken people were left in dire straits.

We salute Makhmalbaf for telling the stories of these diligent and scrappy teachers and the boys and elders they happen upon in their wanderings. All of these impoverished people have been the victims of war in the past and the future holds more terrors. The ground they walk on is littered with landmines; the border to their homeland is closed and dangerous. Any minute now, they could become what military tacticians call "collateral damage." Thanks to Makhmalbaf they have become much more than that to us. We know them as distinctive individuals with stories to tell and fears, hopes, and yearnings familiar to us all. 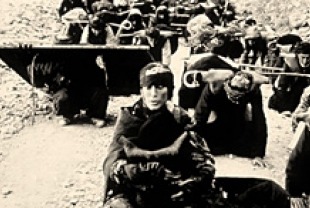