A marvelously entertaining screen adaptation of the classic Charles Dickens novel about a nurturing young man who learns to take care of himself by taking care of others.

In an enthusiastic essay paying tribute to the storytelling talent of Charles Dickens, screenplay writer and director Douglas McGrath (Emma) notes that Nicholas Nickleby is propelled by "mirth and majesty and malice." The story has spawned many film and television adaptations and a nine-and-one-half-hour stage production by the Royal Shakespeare Company. Thanks to his high regard for the dramatic energies and the moral velocities of Nicholas Nickleby, McGrath has given us a marvelously entertaining version of the classic. It is brought to vivid life by an exceptional ensemble of actors and actresses.

Nicholas Nickleby is a country gentleman who lavishes love upon his wife and two children and then, quite unexpectedly, dies, leaving them penniless. His high-spirited nineteen-year old son (Charlie Hunnam) decides to take his mother (Stella Gonet) and his sister Kate (Romola Garai) to London. Having nowhere else to turn, Nicholas petitions his wealthy Uncle Ralph (Christopher Plummer), an investor, for financial assistance. He is a cold-hearted man who has no interest in family ties. Despite his power and connections in the city, he chooses to do nothing more than place Kate with a dressmaker and send Nicholas off to work as a teacher at a Yorkshire boarding school run by Wackford Squeers (Jim Broadbent) and his wife (Juliet Stevenson). The earnest young teacher is appalled by the shameful treatment given the urchin boys in their care.

Nicholas rescues Smike (Jamie Bell), a downtrodden lad who is singled out for special physical abuse. They flee together and find a brief respite from their woes in a touring company of actors led by the smooth-talking Vincent Crummies (Nathan Lane). They feel quite at home with this band of free-spirited outsiders who perform in various small towns. However, when Nicholas learns that his uncle has been treating his sister shamefully by offering her as a mistress to Sir Mulberry Hawk (Edward Fox), Nicholas rushes to her side. Then he squares off against Ralph, condemning him for treating them all so shabbily. This outburst turns his uncle into an even more vehement enemy; he vows to bring down Nicholas, no matter what the cost.

The industrious young man prospers after finding employment with the pleasant and generous Cheeryble brothers (Timothy Spall and Gerard Horan). Nicholas then falls in love with Madeleine (Anne Hathaway). But in the background, his nefarious uncle sets his own energies of malevolence humming against Smike and Madeleine's debt-ridden father. Unbeknownst to Ralph, his feisty and noble-hearted manservant, Newman Noggs (Tom Courtenay), has a few tricks up his sleeve as well. And he has nothing but admiration for the diligence and compassion of Ralph's nephew.

Perhaps the most endearing dimension of this Dickens classic is the portrait of Nicholas Nickleby as a nurturing male. He inherits this capacity from his loving father and then in many different situations demonstrates a loving relationship to those around him. Early in his life, this young man realizes that in order to take care of himself, he must take care of others.

The DVD has an audio commentary revealing the views of the director, Douglas McGrath, on the project, and a breezy featurette in which the cast members talk about each other. A mini-documentary, "Creating a Classic: The Making of Nicholas Nickleby" is recommended for those interested in how the Dickens novel was translated to the screen. Another feature, "View on the Set," enables you to watch several scenes from different angles. 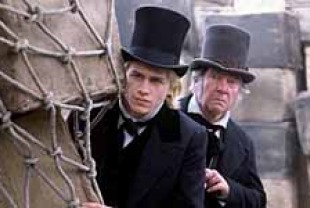