Directed by Luc Dardenne
A rigorously developed Belgian film about a carpentry teacher's close encounter with revenge when he meets the adolescent who murdered his young son.

The Son is Belgium's submission for the Best Foreign Language Film Academy Award. Its star Olivier Gourmet won the prize for Best Actor at the 2002 Cannes Film Festival. Jean-Pierre and Luc Dardenne, the filmmakers, have received acclaim for La Promesse (1996) and Rosetta (1999), their first two releases. In their notes to this rigorously minimalist drama, they write: "The moral imagination or the capacity to put oneself in the place of another. That's a little of what the film demands of the spectator." It is a difficult assignment given the short attention spans of modern-day audiences. Not to mention the movie trend of depicting in detail the iconography of the hostile imagination in stories about gangsters, madmen, and amoral killers.

Olivier (Olivier Gourmet) is a lonely carpentry instructor at a vocational training center for troubled youth. He is troubled by a bad back and an inability to communicate smoothly with others. But in his own quiet way, he has found a way of surviving in a nondescript apartment. He seems to have no interests outside of his work.

Olivier's routine is turned upside down with the arrival of Francis (Morgan Marinne), a sixteen year old who has just been released from a juvenile detention center. The teacher realizes that the boy is the one who murdered his small son in a robbery five years ago. The same day Olivier's ex-wife Magali (Isabella Soupart) stops by with the news that she's pregnant and has decided to marry her lover. It is obvious in his reaction to her that they have had trouble mourning the loss of their son and that this rift caused their separation. Suffice it to say that Olivier's stiff body reveals burdens that have been difficult for him to bear and even harder for him to release.

At first, the teacher doesn't want Francis in his class but then he relents. The boy is serious about taking up the vocation of carpentry. Learning where he lives, Olivier steals the keys to his place and goes there secretly. For a few moments, he lies in the boy's bed. Later, he meets Francis at a fast food place and impresses the boy with his skill at gauging distances with his eye.

The two get together for a trip to the mill to pick up some wood for the projects at the training center. The boy asks Olivier to be his mentor, but the teacher wants some answers first. He questions him about why he was in the detention center. Francis tells about the robbery and strangling a boy who wouldn't let go of him while he was trying to steal a car radio. Olivier is desperate to hear some remorse in Francis, but none is evident. When they arrive at the mill, there is tension in the air and the teacher's body language exudes anger and incipient violence.

The Son is a haunting parable filled with many moments of quiet dignity. But only the adventuresome filmgoer will be able to negotiate the hand-held camera work of Alain Marcoen who spends a great deal of time focused on Olivier's neck. There is no music to accompany the everyday activities of this master wood crafter. Yet in a very austere and unusual way, the Dardenne brothers have fashioned a touching story of the moral imagination that ends with a surprising grace note that defies precise measurement.

Spiritually Literate Readings of The Son

Forgiveness. As you ponder the religious symbols in The Son, consider this from Rabbi Shoni Lablowitz in her book Miraculous Living:

" 'Forgiving' may appear as one word, but in its inner meaning, there are two words, 'for' and 'giving.' Forgiving has less to do with another and more to do with giving to yourself the freedom to release tightness, let go of competition, unveil illusions of boundaries and limits. When you forgive you are simply giving simplicity back to chaos, joy back to anger, love back to fear, and constriction back to expansiveness."

Movies about Forgiveness. In these tense times when it is all too easy to fall into the trap of revenge and resentment, forgiveness is a theme that doesn't show up very often in feature films. The intense focus on Olivier and the lack of any other distractions in this movie enable us to give all our attention to the nature of forgiveness as it plays its way out slowly and subtly in the drama. Other films we have admired on this serious subject include The Mission, The Straight Story, Les Miserables, and Cry, the Beloved Country.

Grief. Two other recent films, both available on VHS/DVD, focus on the reactions of parents to the untimely deaths of their children. The Italian film The Son's Room does a remarkable job probing the anguish of a father over the accidental death of his son. In the Bedroom, in which a son is murdered, is a daring and unsettling film about the complex and taboo dimensions of grief. A Values & Visions Discussion Guide is available for this film; it includes questions on calamity, murder, anger, hurt, listening, evil, and ways to regard our enemies.

The DVD has an interview with the Dardenne Brothers, conveniently indexed by topics from the idea for the film, the writing, locations, casting, shooting, and editing, and another solid interview with the star Olivier Gourmet. Filmographies and still photographs are also included. 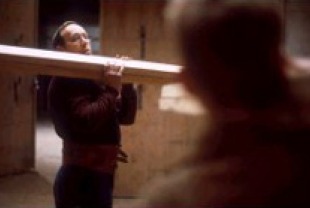