Directed by Amos Gitai
A bold parabolic film about the arrival in Palestine of Jewish refugees from Europe on the eve of the creation of the state of Israel; it depicts the suffering and violence of both the newcomers and the displaced Arabs.

In 1948, Jewish refuges from Europe are jammed aboard a European cargo freighter named Kedma ("towards the Orient"). Most of them have experienced the full brunt of the Nazi persecution, and many have been in concentration camps. Their minds are haunted by images of death and destruction. Some of these survivors tell their stories while others are locked in silence. They are still stunned by their past, and the future is unknown. The refuges are not heading for a harbor of safety and tranquility but for a country under siege: Palestine a few days before the creation of the state of Israel. The English await the arrival of the ship but their mission is really done, and they will be leaving soon.

Members of the Palmach, the underground Jewish defense forces, meet the refugees on the beach. Chaos ensues when the English make a half-hearted attempt to catch the unauthorized newcomers. Klibanov (Moni Moshonov), a schoolteacher, takes several refugees along with him while others flee with Palmach soldiers into the rugged countryside. Rosa (Helena Yaralova), a Russian, lapses into shock recalling her years of imprisonment in Siberia. Menahem (Menachem Lang), a young cantor who lost both parents, vows revenge against anyone who stands in his way.

Meanwhile, some of the able-bodied refugees are given guns and sent into battle with the Arabs trying to defend their land. After witnessing more senseless death and destruction — a mirror image of what he saw in Europe — Janusz (Andrei Kashkar), a Pole, breaks down and delivers a lament for the Jewish people. "From the day we were chased from our country," he cries, "we became a people without a history." But their fixation on the past has brought them to a dubious future in a land that they have to take by strength alone." "Israel is no longer a Jewish country. Not now, and even less than ever in the future. Everything is ruined. Finished."

Gitai has made a quirky film that provides insights into the origins of present day Israeli-Palestinian conflict. The two monologues that end this parabolic drama testify to the director's feisty and independent spirit.

The DVD provides some historical background in the form of a timeline from 1917 to May 1948, the year the film takes place. Another extra is a filmmography of director Amos Gitai, which includes links to three trailers. 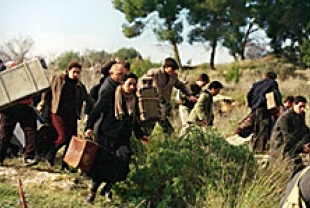