Directed by Simon Wincer
The friendship between a troubled 12-year old boy and an orca at an adventure park, which will appeal to all friends of nature.

In the opening scenes of this adventure film, Willy (Keiko), a 7,000-pound, 22-foot-long orca whale is captured in a net at sea and separated from his family. He is confined in a small pool at the Northwest Adventure Park, where he is expected to learn crowd-pleasing tricks. But Willy is not happy there, and soon the owner of the establishment is complaining about his antisocial behavior and his refusal to respond to training.

Law officials don't appreciate the antisocial behavior of Jesse (Jason James Richter). This 12 year old, who was abandoned early in his life by his mother, has just been placed in a new foster home after another stint of vandalism and petty thievery. Glen (Michael Madsen) and Annie (Jayne Atkinson) do their best to make Jesse feel welcome but he is a hard case.

While cleaning off the graffiti he's made at Northwest Adventure Park, Jesse finds himself mysteriously connected to Willy. Soon these two outsiders, who share a yearning to be with their real families, are friends.

Jesse trains Willy to do some tricks and helps with his daily care. He is tutored in the fine art of understanding orca behavior by Randolph (August Schellenberg), a Native American handyman, and Rae (Lori Petty), an animal trainer at the park. However, once Jesse learns of a scheme by the park's owners to harm Willy for $1 million in insurance money, he decides he must help his friend return to his natural habitat.

Simon Wincer directs this story that will appeal to "friends of nature," a term coined by Albert Schweitzer. Whales have long symbolized the mystery and immense power of the animal kingdom, inspiring in humans a response of awe and fear. Only recently have they been seen as gentle giants, the singers of beautiful ocean ballads. This endearing drama explores the bond that forms between the troubled boy and the incarcerated orca. They pay close attention to each other and are able to share their feelings. In Free Willy, the point is made that whales belong in the wild. No matter how charming these animals might be as performers, humans must respect their right to reside outside our control in their own traveling communities.

Added features for this 10th anniversary special edition DVD release include a conversation with wildlife cinematographer Bob Talbot, a Michael Jackson music video from the soundtrack, a whale "ballet" with footage from the opening scenes of the film, and the theatrical trailers for all three Free Willy movies. 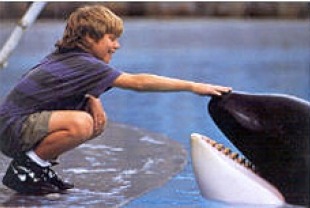