All the Real Girls

Directed by David Gordon Green
A beguiling romantic drama that is unpretentious, unhurried, and completely at peace with the incompleteness of our understandings of love and life.

The setting for this engaging and marvelously acted drama about young love is a run-down North Carolina mill town. The men around there spend most of their time drinking, tinkering around with cars, and drag racing. Paul (Paul Schneider) lives at home with his mother (Patricia Clarkson), who entertains hospitalized children as a clown. She wonders if her 22-year-old son will ever grow up. He and his best friend Tip (Shea Wingham) have seduced and abandoned the eligible young women in the town. Most of them think poorly of Paul as a thoughtless womanizer. One of them tells him that he'll never amount to anything more than he is now — a drunken loser.

But there is one person who sees something different in Paul — Noel (Zooey Deschanel), Tip's 18-year-old sister, who has been away at an all-girl boarding school since she was 12. They are drawn to each other and intimacy blooms in their quiet moments of sharing secrets. Paul feels guilty about his past but she doesn't want to hear anything about it. For her, the slate is wiped clean. "I like it when you smile at me," Noel tells him, and by the way she looks at him, he knows that these words have come directly from her heart. This slowly unfolding relationship is something special and Paul doesn't want to blow it. He's tender and cautious which suits Noel just fine since she admits to being a virgin.

When her brother finds out that they are regularly seeing each other in secret, he explodes in anger. He doesn't want Paul to treat her badly. For a while he refuses to see his friend. But when he realizes that there is nothing he can do, Tip and Paul are reconciled. The intensity of his love for Noel is something new for Paul and he talks with his uncle Leland (Benjamin Mouton), who is still mourning the death of his wife. They are both taken aback by the mysteries of love and the lack of answers to the most important questions. Meanwhile, another buddy of Paul's, nicknamed Bust-Ass (Danny McBride), is attracted to Noel and is just waiting for the right moment to gain her attention.

All the Real Girls is written and directed by David Gordon Green whose debut 2000 film George Washington signaled the arrival of a sensitive and talented filmmaker who isn't afraid to slow things down and catch all the awkward and genuine moments in people's lives when they reach out to each other with desperation and amazing vulnerability. This new film won a special jury prize at Sundance in recognition of its "emotional truth." In one of the most poignant performances we've seen in some time, Zooey Deschanel vividly conveys the exuberance of a shy and sheltered girl who is intoxicated with love and all its wonderful feelings. Her voice and body language convey the universal language of first love. But Noel surprises herself and Paul by testing the depth and resiliency of their relationship. All the Real Girls is unpretentious, unhurried, and at peace with the incompleteness of our understandings of love and life.

The DVD includes an audio commentary with director David Gordon Green and writer/actor Paul Schneider that is full of nice stories about how the cast came together, how the music was selected, and the most touching scenes. There is also a featurette titled "Improv and Ensemble: The Evolution of a Film" with more insights from Green, Schneider, and others. 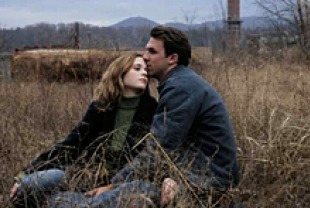