Directed by Israel Adrian Caetano
A riveting slice-of-life drama set in Buenos Aires that presents a harrowing look at urban poverty and the explosive impact of the hatred of foreigners.

Bolivia is a riveting slice-of-life drama set in Buenos Aires, Argentina. Freddy (Freddy Flores) has come to the city after losing his job in Bolivia when U.S. interests burned down the fields where he was working. He is hired as a grill man in a small restaurant run by Enrique (Enrique Liporace). He calls home to tell his wife and three daughters that he'll be making a few dollars a day.

The patrons of the restaurant include some cab drivers who wile away the hours watching soccer and boxing matches on television. A homosexual salesman is given a hard time by Enrique when he stares seductively at Freddy. Rosa (Rosa Sanchez), the waitress, is hit upon by many of the customers who figure she is an easy prey given her mixed blood (she's Argentinian and Paraguayan). She shares her tips with Freddy, and one evening he goes out dancing with her. The night before he slept in an all-night coffee shop after being harassed on the street by cops who dislike foreigners.

Israel Adrian Caetano directs this film about the tensions faced by outsiders. It is most poignant in its portrait of the hatred heaped upon Freddy, who is called a nigger and treated shamefully by almost everyone. He is targeted by Oso (Oscar Bertea), a cab driver who is having financial difficulties. This angry man just can't understand why Freddy has a job while many Argentinians are experiencing economic woes. After drinking too much, he directs his rage at the grill man.

Bolivia, a black-and-white film, hits the mark with its harrowing depiction of urban poverty and the divisive and explosive impact of the hatred of foreigners. 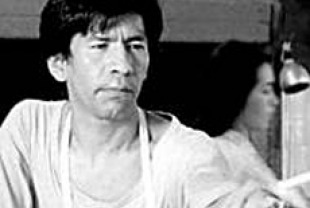