Under the Skin of the City

Directed by Rakhshan Bani-Etemad
Focuses on a hard working and strong-willed mother in contemporary Teheran, Iran, who demonstrates big-hearted courage.

Tuba (Golab Adineh) is the hard working head of a large and troubled family in contemporary Iran. She has contracted asthma at the clothing factory where she labors every day. Her husband Mahmoud (Mohsen Ghazi Moradi) is disabled and unable to work. Her oldest son, Abbas (Mohammad Reza Foroutan), is an errand boy for his employer. He is constantly doling out money to family members, including his sister Mahboubeh (Baran Kowsari), a high school student, and his brother Ali (Ebraheem Sheibani), who is more interested in participating in political demonstrations than in studying. In her heart, Tuba bears all the trials and tribulations that her loved ones undergo in the city, a place where the yearning for a better life sets up big expectations.

Rakhshan Bani-Etemad, the writer and director of this engaging drama, has a keen sense of the complexity of urban living, especially when it involves the juxtaposition of conservative religious influences and the lure of the Western consumerism. Abbas is totally caught up in dreams of making a lot of money and becoming the major breadwinner for the family. He has applied for a visa to Japan where he hopes to spend a year. His best friend, who has been overseas, fuels his fantasies of adventure and financial success. Although Abbas demonstrates confidence in front of his family, he is not very skilled in conveying his feelings to a pretty woman who works at an office where he makes deliveries. He's more overt about his anger over his other sister's situation; she is frequently abused by her husband yet cannot leave him because she is pregnant. The violence of men towards women is a widespread problem in Iran, according to the filmmaker.

Mahboubeh's best friend, Masoumeh (Mahraveh Sharifi-Nia), is beaten up by her religious brother after he learns that she secretly attended a music concert. Unable to bear any more from him, she runs away and becomes a prostitute. When Mahoubeh meets her in the park, they are both arrested for vagrancy.

Tuba tries to understand the struggles of her children but is worn down by the physical burdens of her work and illness. In a symbolic gesture, she tenderly nurtures a scraggly tree in the courtyard of her house. But even her home is at risk. In order to get the money for his visa for Japan, Abbas convinces his father to sell it behind Tuba's back. The consequences are catastrophic for nearly everyone.

Buddhist teacher Cynthia Kneen has written: "When we say a person has heart, it doesn't mean they are weak and sentimental. We mean they are willing to be exposed, willing to be touched nakedly by the world." In this powerful drama, Tuba demonstrates that her heart is strong enough to endure all things. She is a truly heroic figure.

The DVD gives you weblinks to an interview with the director and the official site. It also has previews of other Wellspring titles, including Russian Ark, Marooned in Iraq, The Circle, Maryam, and Under the Sand. 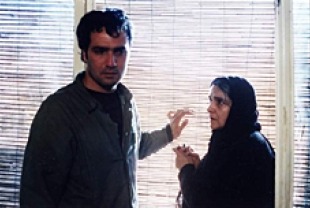