Directed by Gurinder Chadha
A delightful English comedy that charts the single-mindedness of an Anglo-Indian girl to fulfill her dream of becoming a soccer player.

Jess Bhamra (Parminder Nagra) is an 18-year-old Londoner who is bound for college and the study of law. However, her real passion is soccer, and her hero is David Beckham, England's top professional in the popular sport. Her strict Anglo-Indian parents desperately want Jess to follow in the footsteps of her older sister Pinkie (Archie Panjabi), who is about to get married. Instead Jess slips off secretly to the park where she practices soccer with boys.

One day Jules (Keira Knightley) watches her play and asks her to try out for the Hounslow Harriers, an all-girl team coached by Joe (Jonathan Rhys Meyers), a once promising player whose career ended with a terrible knee injury. Jules has some problems with her mother (Juliet Stevenson), who wants her to be more feminine and less obsessed with soccer. Her father supports her interest in the game. Jules dreams of going to America where women actually can play in a professional league of their own.

This is Gurinder Chadha's third film (Bhaji on the Beach, What's Cooking), and it has been a smash hit in England. The director does a wonderful job catching some of the tensions in the Bhamra household where Jess's traditional parents are appalled by their daughter's rebellious attitudes. "Anyone can cook aloo gobi," she complains, "but who can bend a ball like Beckham?" They hope that she will eventually get engaged to Tony (Ameet Chana) but he secretly admits to her that he's gay.

In one of the drama's many funny moments, when a beeper goes off at Pinkie's wedding, all the Indian grannies reach into their purses for their cell phones. Tradition and modern ways intermix in the activities of these characters. Another comic motif has Jules's mother worrying that her daughter is having a lesbian affair with Jess. All these mix-ups do not subtract from the delight in watching the lead character stick to her dream of becoming a soccer player, no matter what the obstacles. Newcomer Nagra Parminder is buoyant as Jess and the spunky mixture of Indian and pop tunes keeps the proceedings zipping along nicely. 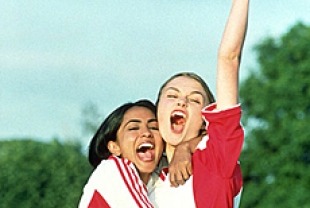