Directed by Robin B. Armstrong
A thoughtfully made and intimate drama about a veteran relief pitcher who turns to mentoring a younger player as his way of saluting the sport he loves.

Here is one of those thoughtfully made and intimate dramas that often gets overlooked in comparison with bravado productions with big stars and large budgets. William Russ gives a tour de force performance as a veteran relief pitcher for a class D professional baseball team. Despite his dogged determination to keep playing, his body and bad heart are uncooperative. So is the owner of the team (Jeffrey Tambor) who wants him dropped. Russ takes a shy rookie pitcher (Glenn Plummer) under his wings and passes on to him all he knows about the game.

Director Robin B. Armstrong keeps the film focused on the interplay between these two men, and it is a wise decision. Pastime is a poignant character study of an individual whose mentoring at the end of his career is his best way of giving back to baseball all it has given to him. This drama proves that for many middle age men, mentoring is their way of doing the spiritual practice of nurturing another person. 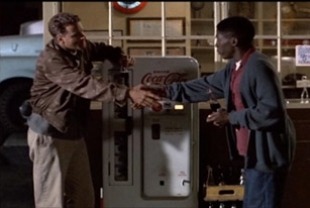