I, the Worst of All

Directed by Maria Luisa Bemberg
An illuminating and soulful portrait of Latin America's first great poet, who happened to be a brilliant nun in seventeenth-century Mexico.

Sister Juana Ines de la Cruz (1648-1695) has been called by many the first great Latin American poet. Born an illegitimate child in Mexico, she taught herself to read when she was three years old and entered a convent at age 20. The early learning paid off when the leading scholars of the day tested her in a public examination, which she passed with flying colors. As a young lady-in-waiting in the Viceroy's Court, she continued to indulge her passion for learning.

This sensitive and artful glimpse of her life and work by director Maria Luisa Bemberg (I Don't Want To Talk About It) begins in 1680, when the viceroy of Spain (Hector Alterio) and a conservative archbishop (Lautario Murua) attend a play written by Sister Juana (Assumpta Serna). The man of God finds it lascivious whereas the cultured politician and his wife, the vicereine (Dominique Sanda), are quite taken with the drama. Knowing that the Church is cracking down on its perceived enemies, the vicereine offers Sister Juana her protection. The two women become friends and share a feeling of sadness over the terrible treatment of their sex by men in power.

Thanks to a liberal abbess at the convent, Sister Juana is able to meet with the leading writers and scholars of the day, all of whom hold her in high regard. Her large library, one of the best in the Americas, is filled with volumes not readily available to the general public. The talented nun also teaches music and does accounting work for the convent. When the vicereine gives birth to a son after losing three babies, Sister Juana rejoices with her. Then the poet and playwright shows her friend her own “children” — her telescope, her lyre, and her books — but notes, "It is a hard path without sweetness." Perhaps that is why the tender love she has for the vicereine lights up her life and makes her feel even closer to God.

I, The Worst of All is based on Mexican Nobel Prize-winning author Ocatavio Paz's book Sor Juana, or Traps of Faith (1988). Director Bemberg, who died in 1995, uses shadows, cloister bars, and sparsely lit scenes to convey the precariousness and loneliness of this brilliant nun whose creativity brings her under fire by the woman-hating archbishop. His power plays lead to several forays against Sister Juana, who is open to attack once the vicereine returns to Spain. The new abbess turns against her, as does her long loyal confessor. Both are convinced that pride has gotten in the way of her service to God as a nun. The shattering finale depicts the process whereby the Church seeks to reform Sister Juana and break her spirit. I, the Worst of All is another important entry into the growing number of films about women and their struggles with the Catholic church hierarchy.

On the opening scroll of the DVD, these words by Sister Juana Ines de la Cruz give a sense of her exquisite poetry:

I am not who you think I am.
But you have given me
Another being with your pens
Another breathe through your lips
And unlike my own self
I wander among your poems
Not as I really am
But as you want me to be. 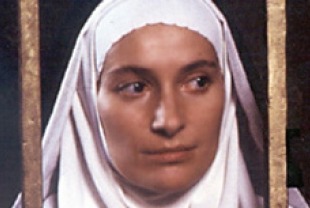