Directed by Jeff Blitz
The stories of eight finalists in the National Spelling Bee and the excruciating pressures on them to win in this very competitive test of language skills and memories.

Spellbound was an Oscar nominee for Best Documentary Feature of 2002 but lost out to Bowling for Columbine. Director Jeff Blitz makes the most out of this opportunity to capture a multidimensional glimpse of American society through the lens of a cultural institution — the National Spelling Bee. He follows eight children competing in the finals in Washington, D.C., for the prize of $10,000.

The focus, of course, is on competition and the incredible role it plays in the lives of these boys, girls, and their families. Those who enshrine this sacred cow believe that our very existence would lose meaning without competition. It would be boring not to have the constant designation of winners and losers. Americans have been taught that competition builds character and makes better people. No wonder parents and educators push children to excel and especially to do better than their peers. As a result, many youngsters never have the thrill of just doing something for the sake of doing it without regard to the outcome. Instead, everything must be done to experience the thrill of victory and to avoid the agony and embarrassment of defeat. These themes are richly explored in this very dramatic and entertaining documentary.

The first section of Spellbound introduces the children from different parts of the country, along with their families and teachers. Angela is the daughter of Mexican immigrants from the Texas panhandle. Her father doesn't speak much English and yet we learn through her brother that all of his dreams about the good life in America will be answered if Angela wins the National Spelling Bee. April is a real competitor who would rather stay home and study word origins than go to the mall with friends. Ashley, an African American who lives in the Washington, D.C., projects with her single mom, believes she has a good chance of winning even though she doesn't have access to all the resources the others have.

Emily is the wealthiest of the group; she lives in New Haven. She honestly admits that beating out the competition is important to her. Harry, the oddest kid in the group, comes across as a real comedian with his unusual study habits and off facial contortions while he struggles to figure out the spelling of a word he does not know.

Neil is an East Indian boy whose parents have driven him relentlessly in preparation for the competitions. They try to cover all the bases with computer programs, working on all the words used in former contests, and using various coaches. The boy barely has time to breathe. Ted, on the other hand, comes from a rural Missouri town and has few friends since his intelligence has set him apart from others. He hopes to do well in Washington, D.C., but doesn't have a lot riding on the results. Nupur is returning again after being eliminated in the 1998 Bee. She is determined to win this time.

The last segment of the documentary focuses on the performances of these eight competitors in the National Spelling Bee finals. When the dreaded bell sounds after a word is misspelled, the contestant must leave the stage. Watching the elimination of one boy or girl after another, the words of Neil's mother come to mind. When asked how the family has handled the pressure, she said, "When you fight in a war, everybody has the same goal." That image stings and settles in the mind as we watch the finalists square off against each other. When they lose, these children look like shell-shocked victims of war. And that's exactly what they are. Although their parents would never admit it, rather than building character, competition sabotages self-esteem and warps everything it touches by turning playing fields into battlefields.

The DVD has an audio commentary by director Jeff Blitz, bonus footage of three additional spellers, and the theatrical trailers. It also answers the question many viewers will have after watching the documentary: Where are the 8 profiled spellers now? A "educational guide" gives a history of spelling bells and includes a kit on how to host your own. 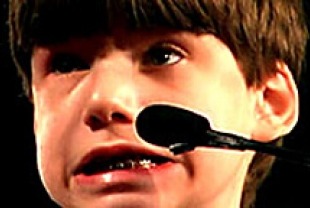