Directed by Arthur Penn
A picaresque masterpiece about an inimitable American anti-hero whose wild adventures are delivered into our hearts and minds with the robust vitalities of comedy and the sharp blows of tragedy.

Jack Crabb (Dustin Hoffman) is the sole white survivor of Custer's Last Stand at Little Big Horn. As the film opens, this 121-year-old man is giving an interview to a student. With a fading voice still charged with wit and humor, Crabb unwinds a magical tour of his life in the Old West.

Adopted as a brave after his family is massacred by Pawnees, Jack is brought up in a Cheyenne tribe. His Indian grandfather, Old Lodge Skins (Chief Dan George), teaches him about the difference between the Cheyenne (who call themselves "Human Beings") and the whites: "This will be the first time I have ever faced the whites as an enemy. I have always believed they had a reason for what they did and I still do. They are strange and do not seem to know where the center of the world is. And because of that, I have never liked them but never hated them either. However, recently they have been behaving badly towards the Human Beings. Therefore, we must rub them out."

In the ensuing battle with the calvary, Jack is captured by the whites and almost knifed until he blurts out: "God save George Washington. God bless my mother!" His life is spared when the trooper learns he is white. The Reverend Silas Pendrake (Thayer David) and his beautiful wife (Faye Dunaway) adopt him and bring him into his "religious period" of life. In contrast to the five years with the Cheyenne, Jack is taught about the wickedness of the flesh and the proper rules of a godly life. The Pendrakes seek to obliterate his primitive ways and make him into a Christian. However, after Jack sees Mrs. Pendrake consumed by the fire of her loins with the town's soda-water proprietor, he decides to hit the road.

Jack's successive adventures take him through many other periods. He's a con-man with Allardyce T. Merriweather (Martin Balsam). He's a gun-slinger (the Soda Pop Kid) who meets Wild Bill Hickok (Jeff Corey). He's an upright member of society who marries Olga (Kelly Jean Peters), a Swedish girl, and sets up a store in partnership with a friend. And finally, he becomes an Indian scout for General George A. Custer (Richard Mulligan).

The picaresque adventures of Jack Crabb are wild, incredible, and filled with the robust vitalities of comedy and the sharp blows of tragedy. In the process, he is tar-and-feathered along with Merriweather; he loses his yen for gun-fighting when he sees Hickok mow down a contender with bullets; he loses Olga to the Indians and his business to a corrupt partner; and he comes to hate the inhumane games of the military under Custer.

Returning to the Cheyenne, he takes a wife, Sunshine (Aimee Eccles), and then loses her when the reservation is slaughtered by the calvary. After a drunk period, he joins Custer as an act of revenge and ultimately counsels the General to make his stand at the Battle of Little Big Horn. During the massacre, Jack is saved by one of his friends among the Cheyenne. Awakening from his wounds, he finds himself in the tent of his grandfather, Old Lodge Skins — home again.

Little Big Man brings laughter and a lump to the throat. In this brawny, rough and tumble adventure, the ludicrous and the serious mingle as if to mediate the pressures and complexity of history. Arthur Penn, the director, believes that comedy is well suited to assimilate the contradictions of reality. Or as theologian Harvey Cox has written: "Laughter is hope's last weapon. Crowded on all sides with idiocy and ugliness; pushed to concede that the final apocalypse seems to be upon us, we seem none the less to nourish laughter as our only remaining defense. In the presence of disaster and death, we laugh instead of crossing ourselves. Or perhaps better stated, our laughter is our way of crossing ourselves." 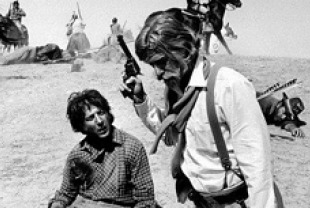 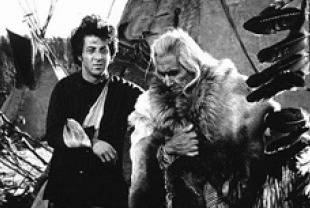 Read our reflections on X-The Mystery in Little Big Man