Directed by Michael Caton-Jones
How a resilient teenager survives childhood trauma and adversity through independence, anger, and creativity.

In the opening scene of this morally edifying screen version of Tobias Wolff's 1989 memoir, it is 1957 and Toby , a teenager, is traveling with his mother Caroline to Utah. Their high hopes for a new life are shattered when her abusive lover shows up in Salt Lake City. They flee again, this time to Seattle.

Caroline, who has a habit of settling for tyrannical men, does it again. She married Dwight, an auto mechanic who lives with his three children in Concrete, a remote rural community. Toby, who has changed his name to Jack after Jack London, is not impressed with his new stepfather. He immediately senses the man's meanness after watching his mother beat him and all other competitors in a local turkey shoot. Dwight makes her pay and pay again for this humiliation.

Dwight sees Jack as a "hot shot" in need of discipline and direction. He forces the boy to take a paper route and to shuck horse chestnuts in spare moments. He steals Jack's cherished rifle and trades it in for a hunting dog. And after discovering that his stepson has gone for an evening joyride in his car, he beats him up.

Director Michael Caton-Jones draws out an impressive performance form Leonardo DiCaprio as Toby, an adolescent who learns under pressure how to keep his soul alive. Robert De Niro is scary as the alcoholic and self-hating Dwight. He forcefully conveys a man whom everyone in the family tiptoes around lest they arouse his stormy anger. Ellen Barkin is just right as Toby's exhausted mother who advises him to look on the bright side of things in order to survive.

The worldly-wise screenplay by Robert Getchell (Alice Doesn't Live Here Anymore) shows how Toby rises above the psychological and physical hurts he suffers in Dwight's household. The boy cleverly tries on a variety of roles within the community and is energized by rebellion. He is buoyed by his friendship with the town's sissy who shares with him a desire to escape from Concrete. Eventually Toby's dreams of freedom are fulfilled when he takes steps to get himself into a posh private school on a scholarship.

Although some will be dismayed by this film's harrowing portrait of abuse, most would do well to take to heart the drama's more salutary message. Resilient youth can survive childhood trauma and adversity through anger, independence and creative initiative. 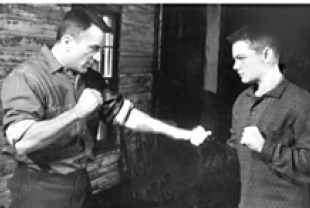