Directed by Gilbert Cates
Offers plenty of food for thought on the nature of God, the meaning of faith, the limits of psychiatry, and the importance of story-telling.

Tracy (Louanne) is an eleven year-old whose parents are separated. She lives with her mother (Suzanne Pleshette), a real estate agent. Once a week her dad (David Birney), an ad man, takes her out to a movie and a Chinese restaurant. That's where Tracy gets a message from God (George Burns). In her fortune cookie. It says, "Meet me in the lounge, God." Why has "The Owner of the Store," as he calls himself, picked Tracy as his messenger? He likes it when she tells her father: "Sometimes you just have to believe in things you can't see." And presto — she's blessed with a vision of God in a well-tailored dark blazer.

Everything's not going well with the world. "They're still not getting my message. I'm just not in people's thoughts. They don't believe in me as much as they should these days." Since Tracy's father is in advertising, she suggests that God get a slogan so he can become a household word. Pretty soon she has a job dreaming up an ad campaign for "The Man Upstairs." He rejects her first efforts as too derivative. Tracy then asks her friend Shingo (John Corwin Louie) to help and he stumbles upon "Think God." They convince their classmates to put up the slogan on sidewalks, sidings, fences, lampposts, buses, billboards, banners, and bumper stickers.

God's pint-sized prophet soon finds herself in trouble with the school authorities. They expel her for stirring up trouble and then claiming God put her up to it. Her mother and father are dumbfounded by the whole turn of events. They take Tracy to a psychiatrist (Anthony Holland) who gives her a battery of tests and brain scans. His conclusion is that her claim to have seen and talked with God indicates "a real psychosis." He recommends that Tracy be sent to an institution for treatment.

Meanwhile, there's a citywide students' strike calling for Tracy's re-admittance to school. NBC's Today Show does a report on the "Think God" phenomenon which has spread all over the world. Dr. Joyce Brothers offers a commentary in support of Tracy. In response to all the turmoil, a judge sets up a panel of psychiatrists to determine whether or not she should be sent to a home for disturbed children. God arrives on the scene in the nick of time and proves to the panel that there's more to life than usually meets the eye.

Oh God! Book II, directed by Gilbert Cates, gives people of all religious persuasions a chance to exercise their values and imagination. This is an ideal film for families to see and talk about together and is especially appropriate for youth groups. Some of the main themes suggested by the screenplay by Josh Greenfeld are the nature of God, the way of discipleship, the meaning of faith, the limits of psychiatry, the uses of advertising, and the significance of storytelling. A Values & Visions Discussion Guide to the film can be found here. 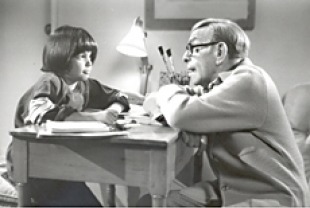