Directed by Charles Herman-Wurmfeld
An ebullient comedy that will appeal to all lovers of animal's rights, people's democracy, inner flair, and a heroine who believes in her own true valiant voice.

In the clever and witty opening scenes of this funny sequel to Legally Blonde, friends of Elle Woods (Reese Witherspoon) are looking through a scrapbook they intend to give her at her upcoming wedding shower. Her Delta Nu sorority sisters Margot (Jessica Cauffiel) and Serena (Alanna Ubach) and her manicurist buddy Paulette (Jennifer Coolidge) are excited about Elle’s marriage to Emmett (Luke Wilson), a professor at Harvard Law School. They comment on the distinctive benchmarks in her winning fashion sense, such as her being a professional shopper at age three.

Indeed, everything seems to be peachy keen for Elle in the early stages of this perky and winsome story written by Kate Kondell and directed by Charles Herman-Wurmfeld. She’s enthusiastically involved in planning a fancy wedding and has even managed to dazzle her fiancé by arranging for the ceremony to be held at Fenway Park baseball stadium. But when she decides to invite the unknown mother of Mr. Bruiser, her feisty Chihuahua, to the wedding and hires a detective to find the dog, a hint of disaster appears on the horizon.

Lo and behold, she discovers that this animal is being used as a subject for tests by a major cosmetics firm. Fired up by this shocking news, she decides she must bring a lawsuit against the company. But her idealism and ardor fall on deaf ears in the board room of her law firm. Before she can blink her pretty eyes, Elle is fired. Undaunted, she decides that the only way to save Bruiser’s mom is to make testing on animals against the law. Soon she is on the way to Washington D.C. to work as a legislative assistant to Sally Fields, a liberal Congresswoman.

“Hello patriots!” are the first words out of her mouth to those serving the people in power in the nation’s capitol. Needless to say, Elle stands out with her all pink outfit amidst all the corporate gray and black suits. In the Congresswoman’s office, she receives a less than enthusiastic welcome. In fact, Grace (Regina King), the African American chief of staff, is downright hostile. When she first sees Elle, she directs her to the orientation room for interns. But the Congresswoman orders her staff to help this newcomer get a bill passed to stop animal testing.

While Elle’s disarming honesty and spunk falls flat among this cynical crew of once ardent political idealists, it works in her favor in a crucial friendship with Sid Post (Bob Newhart), who has been a doorman for 30 years at the Wellington Hotel. He identifies with her cause and is impressed with her determination to push ahead in the face of resistance from every quarter. And he has an insider’s insight into what works and what doesn’t among Washington’s power brokers.

Who could have guessed that a summer comedy sequel would make the perfect Fourth of July release with its shining portrait of a Washington outsider who marches to the beat of her own idiosyncratic drum and is convinced that “doing the right thing is in everybody’s best interest”? Anyone who has kept up with journalist Bill Moyers’ investigative reports knows that the present-day political system in Washington is controlled by wealthy corporate contributors who protect their own interests by buying influence with members of Congress on both sides of the aisle. This process is made clear when the Congresswoman caves into pressure put on her by a big bucks backer who wants the bill against animal testing killed. After Elle tells her “I believe in the people,” she replies, “The people believe what you tell them to believe . . . You can’t get the people to care.” Those are fighting words to an idealist like Elle. It is time to bite the bullet and fly in the face of the established system. The beauty who is convinced of the enduring value of a makeover, decides that Washington needs a makeover.

Using a political maneuver known as a discharge petition, Elle mounts a people’s campaign for animal rights, using some unusual strategies: interns as cheerleaders in the halls of legislators, free hair treatments and beauty consultations for members of Congress, a phone tree operated by her sorority sisters, and a Million Dog March. It is a real hoot to witness this grassroots campaign unfold.

In Legally Blonde, Elle proved that a person with inner flair can accomplish almost anything. That motif comes through loud and clear in this wonderful sequel where she champions the cause of her best friend in the world, where warm and fuzzy feelings are celebrated over chilly and cerebral cynicism, and where political change can be brought about by those who are savvy and street-smart enough to buck the system. Best of all, this spunky film gives us a heroine who believes in her own voice and is willing to remain true to those qualities that make her special. 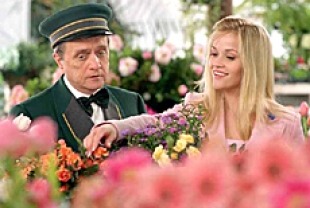