Directed by Francois Ozon
A mesmerizing and imaginative psychological thriller about the delights that can come when we explore aspects of ourselves that we have previously ignored or covered up.

Sarah Morton (Charlotte Rampling), a spinster who lives with her elderly father, is a very successful English mystery writer. She has grown tired of constantly concocting elaborate crime plots and yearns to explore other territories in her writing. Her patient publisher (Charles Dance) has a vested interest in keeping her cranking out mysteries. After listening to her complaints, he offers her the use of his holiday home in France where she can rest and renew herself. On the train there, she fends off a loyal fan with a curt statement denying that she is Sarah Morton. Still uptight at the new place, she gradually relaxes into a comfortable routine and actually begins a new work of fiction, something completely different from anything she has written before.

Then the orderliness, privacy, and peace of this French paradise is shattered by the arrival of Julie (Ludvine Sagnier), the publisher’s rambunctious teenage daughter. This hedonist thinks only of herself and immediately has the swimming pool cleaned up so she can lounge topless by the shimmering water. Sarah is very upset with the unexpected and unwanted company of this stranger who brings older men back to the house late at night and has sex with them. The repressed and angry writer is unhinged by the presence of someone who represents everything that she is not — a wild, aggressive, uncouth, and self-centered voluptuary.

But then in the midst of her rage against Julie, Sarah decides to learn more about her. She asks questions about her father and mother and even sneaks into her room to look at her diary. Suddenly, Sarah is obsessed with this unstable young woman, who is hiding many secrets. When Julie brings Franck (Jean-Marie Lamour), a handsome waiter at her favorite restaurant, back for an evening of sex, Sarah finds herself overcome by feelings of jealousy.

Swimming Pool is a mesmerizing French drama directed by Francois Ozon. He has co-written the screenplay with French novelist and screenwriter Emmanuele Bernheim. Charlotte Rampling, who also starred in Ozon’s Under the Sand, is superb as the fussy and short-tempered mystery writer. She convinces us that this middle-aged woman has up to this point not explored the ghost continent that lies within. Julie’s s arrival becomes an occasion for Sarah to come to terms with the rule-breaker and sexually liberated persona she has squelched for most of her life. Watching the satisfying twists and turns in this psychological thriller, we realize what a delight it is to discover aspects of ourselves we have previously ignored or covered up. The imagination is a tricky and seductive enchantress who keeps offering us new adventures in self-exploration. All those who savor such pleasures will relish Swimming Pool. 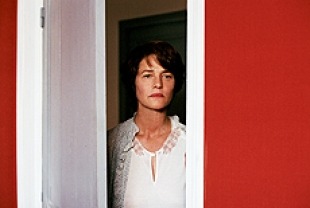 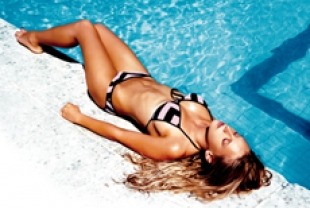