Directed by Volker Schlondorff
A film adaptation of Margaret Atwood's bestselling 1986 novel that heralds freedom as a cherished ideal.

In The Handmaid's Tale, right-wing religious fundamentalists have overthrown the American government and established a repressive puritanical society called the Republic of Gilead. Natasha Richardson stars as Kate, who, after losing her husband and daughter while trying to escape to Canada, is captured and assigned to the household of Fred (Robert Duvall), a commander of the regime, and his barren wife (Faye Dunaway). After years of environmental catastrophes, most of the women in this society cannot bear children. Kate, renamed "Of Fred," has tested fertile, so she is to be a "handmaid" — a term taken from the Biblical story of Rachel. Her sole task is to bear children for the commander.

The screenplay for The Handmaid's Tale by Harold Pinter conveys Kate's humiliation, boredom, alienation and yearning for freedom. Her allies, who are also suffering from the suppression of human rights in Gilead, include a prostitute (Elizabeth McGovern), another handmaid (Blanche Baker), and the commander's chauffeur (Aidan Quinn). Like George Orwell's 1984 and Doris Lessing's Memoirs of a Survivor, this work of speculative fiction presents a portrait of a future society and uses it to explore the consequences of present-day policies and developments. Anyone faintly concerned about environmental degradation, women's rights to control their own bodies, male chauvinism, censorship, public displays of violence, and procreation poltics will find this film to be quite chilling. In addition, it reveals why freedom remains the most precious idea and ideal in the world. Volker Schlkondorff directs The Handmaid's Tale. 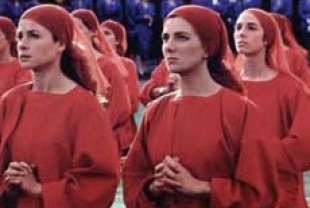