An Angel at My Table

There is nothing more satisfying than having the luxury of watching a life unfold before your eyes, particularly one in which obstacles are overcome. An Angel At My Table is based on New Zealand poet and novelist Jane Frame's three volume autobiography. Australian director Jane Campion (Sweetie) celebrates the survival of an artistic soul.

In part one, Janet (Karen Fergusson) grows up in a large but poor family in a New Zealand farm. Despite a desperate need to be accepted by her school classmates, Janet, a pudgy girl with frizzy hair, never quite fits in. Her parents and siblings are supportive, however, and she finds an alternate world in poetry and the reading of fairy tales. Then in adolescence Janet is staggered by the accidental drowning of her older sister.

In part two, Janet (Kerry Fox) attends college. By then she has already turned inward. The social pressures of teaching lead to a nervous breakdown. Misdiagnosed as a schizophrenic, she spends eight years in a mental institution where 200 shock treatments are administered to her.

Janet's writing provides an escape from this nightmare world. Just as she is about to undergo an operation similar to a lobotomy, she learns that her first book has been published. Later, she is released from the hospital and receives a literary fellowship.

The final section of An Angel At My Table charts Janet's trip from new Zealand to London and Spain. She experiences her first love affair with a self-centered American. She learns to handle the adulation of the literary establishment.

The film ends with her return to New Zealand where she is finally free to creatively nourish her solitude in a fond and familiar setting. An Angel At My Table takes life studies to new heights with its honesty, wisdom, and deep down joys.

DVD special features include an audio commentary by director Jane Campion, an audio interview with Janet Frame, and a documentary on the making of the film. 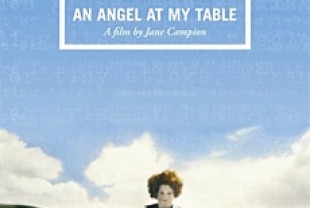