Directed by Randa Haines
A fresh appreciation of the dynamic interplay between mind, body, and soul in the art of healing when a doctor faces problems normally confronted only by patients.

Here is a film that portrays what happens to one member of the medical establishment when he faces problems normally confronted only by patients. William Hurt plays Jack, a cool, self-centered surgeon who is in total control of his successful life until he is diagnosed as having cancer of the throat. Then he finds himself subject to the negligence, indifference, bureaucratic regulations, and humiliations which many have experienced in hospitals. Ignoring his wife, Jack seeks moral support from a woman dying of a brain tumor. Elizabeth Perkins portrays this character as a healer who restores Jack to life — and to a new vision of what it means to be a doctor. The film, directed by Randa Haines, gives us a fresh appreciation of the dynamic interplay between mind, body, and soul in the art of healing. 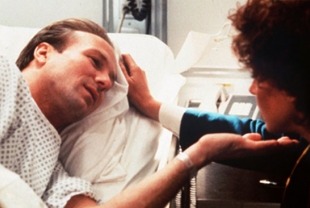