Directed by Tony Bill
A comedy which celebrates community and satirizes the advertising industry.

Crazy People is the best comedy of the year, with its blend of laughter, tears, and satire. Dudley Moore has had a string of mediocre performances, but under the direction of Tony Bill he shines as Emory Leeson, a burned-out Madison Avenue advertising executive. Just before his associate drops him off at a psychiatric hospital, Emory creates a series of ads which tell the truth, such as selling Volvos as "boxy but safe" or pitching United Airlines with the quip, "Most of our passengers get their alive."

When they are mistakenly printed, J.T. Walsh as the head of the ad agency hits the ceiling. But the public loves them and Emory is soon back in business, operating out of the sanitarium where his associates are now the men in his therapy groups.

Daryl Hannah is featured as a mental patient who is frightened of life. She falls in love with Emory. Mercedes Ruehl as Dr. Baylor is surprised by the positive effect this newcomer has on his fellow inmates. Screenwriter Mitch Markowitz has fashioned a feel-good comedy which celebrates community and the kind of people who make us feel a little better each time we're in their presence. And, of course, Crazy People is filled with delicious comedy bits which poke fun at advertising in America. 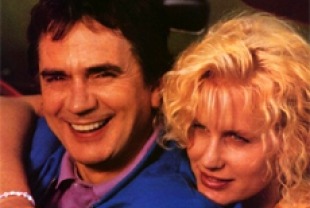