Directed by Stephen Frears
A soul-stirring movie that will rock you to your foundations if you just come to it with an open heart.

"For you and I, there is only survival," says Okwe (Chiwetel Ejiofor), a Nigerian doctor living illegally in London, to his friend Senay (Audrey Tautou), a Turk who works as a chambermaid at the Hotel Baltic in violation of her status as a political refugee. With no other family or relatives, they trust each other. He sleeps on her couch in between his day job driving a minivan and his night job as a receptionist at the hotel. Out of the kindness of his heart, Okwe dispenses some medicine to his boss and coworkers at the cab company who have sexually transmitted infections.

One evening, Okwe is sent to a room where a toilet is overflowing. He discovers an obstruction has been caused by a discarded human heart. Later, he meets a Somali in agony after a botched operation to remove his kidney. It turns out that Sneaky ( Sergi Lopez), manager at the Baltic, is running a profitable trade in human organs out of the hotel. He wants Okwe to do the next operation in exchange for a visa.

Things get even more complicated when Senay, who is being hounded by immigration officers, seems willing to risk everything in order to get a ticket to New York. She is astonished to learn that Okwe has already been there. "You were in New York and you came back?" she asks. "It is an African story," he answers.

Dirty Pretty Things is an amazingly gritty and compelling English film directed by Stephen Frears (My Beautiful Laundrette) from a screenplay by Steven Knight. The crisp photography by Chris Menges (Killing Fields, The Mission) vividly conveys the many moods of London as a multicultural urban center. The performances are all superb right down to minor ones by Benedict Wong as a Chinese employee in a hospital mortuary who is Okwe’s chess partner, and Sophie Okonedo as a prostitute with many talents.

While watching a well-realized drama like this one unfold, we see how invisible these immigrants really are in a world built upon money, power, and status. Okwe and Senay struggle for dignity when the society treats them like nobodies. Frears makes it possible for us to briefly take a step outside our internal gated communities and empathize with these cultural strangers.

"It is a miracle," African-American theologian Howard Thurman once wrote, "when one person, standing in his place, is able, while remaining there, to put himself in another person’s place, to send his imagination forth to establish a beachhead in another person’s spirit, and from that vantage point so to blend with the other’s landscape that what he sees and feels is authentic . . . To experience this is to be rocked to one’s foundations." Dirty Pretty Things is the kind of movie that only comes along once in a while. It will rock you to your foundations if you just come to it with an open heart.

The DVD has an audio track commentary by director Stephen Fears as well as a brief behind-the-scenes feature. 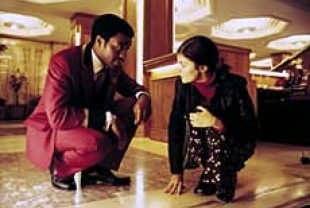