Given the tendency of many American filmmakers to avoid complex and ethically charged periods of American history, Come See The Paradise must be given high marks for its moral seriousness. Written and directed by Alan Parker, the film stars Dennis Quaid as Jack McGurn, a fiery East Coast union organizer who arrives in Los Angeles in 1936 to start his life over after many disappointments. He finds a job as a projectionist in a Japanese cinema run by Hiroshi Kawamura, an first-generation Japanese immigrant who has raised his large family to be proud of their heritage.

When Jack falls in love with Lily, beautifully played by Tamlyn Tomita, her father refuses to let them marry. They flee to Seattle where intermarriage isn't forbidden, and Jack takes a job in a cannery. Their happiness is short-lived when he jeopardizes their security by resuming union activities. Lily leaves with their daughter and is reunited with her family.

In the second half of the film, the Kawamura family endures incarceration, humiliation, and the loss of jobs and property as the result of the U.S. policy of interning Japanese Americans during World War II. After living for a while in horse stalls at a race track, they are transferred to a desert camp. Lily's brothers respond differently to a loyalty questionnaire; one joins the U.S. military service while the other, a militant "No No Boy," is eventually repatriated to Japan. Jack, meanwhile, learns that Lily is the only reason to live and spends as much time with her as he can after his induction into the army.

The American Civil Liberties Union has called the internment of Japanese Americans "the worst wholesale violation of civil rights of American citizens in our history." Alan Parker's sobering film convincingly captures and conveys the human dimensions of this huge injustice. 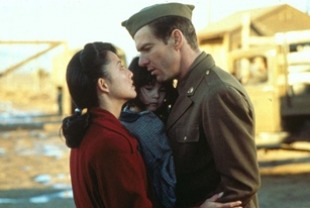