Directed by Norman Jewison
Reveals the virulence of racism.

On a night in 1944, a black sergeant is shot to death outside Fort Neal in Louisiana. Scuttlebutt around the base has it that he was murdered by the Ku Klux Klan. Captain Davenport (Howard E. Rollins, Jr.), a military attorney, is sent by the Department of the Army in Washington to investigate. He is the first black officer that anyone at the segregated base has ever seen. Davenport causes further consternation by wearing dark sunglasses like General Douglas MacArthur's.

After meeting with Captain Taylor (Dennis Lipscomb), the West Point trained white commanding officer of the black troops, and visiting his superiors, Davenport realizes his assignment will be even more difficult than he thought because of racial tensions at Fort Neal and in the nearby town. Ordered to solve the mystery quickly, the black officer begins interrogating the soldiers who knew the slain sergeant.

This gripping movie has been adapted for the screen by Charles Fuller, who won a 1982 Pulitzer Prize for his drama A Soldier's Play. Although the whodunit aspect of the story is engaging, the film's real clout is in its telling observations on racism, black pride, and black self-hatred. Through flashbacks evoked during Davenport's interrogations, the complex character of the murder victim, Sergeant Vernon Waters (Adolph Caesar), emerges as the central factor of the drama.

The hard-nosed tough-as-nails Waters, who was decorated during World War I, sees it as his mission to transform "the lazy, shiftless niggers" under his command into soldiers capable of winning the respect of white America by proving their excellence fighting the Germans and the japanese. However, the men do not live up to his standards of perfection, and the black troops are not called to battle overseas.

Waters becomes the target of Wilkie's (Art Evans) bottled-up anger when he demotes the soldier for drunkenness. He rides Private Melvin Peterson (Denzel Washington) for his insubordination, and he doesn't like Private Henson's (William Allen Young) attitude. All three men become suspects in Davenport's eyes. His further investigations uncover an angry encounter betwen two racist white officers and Waters on the eve of his death. Perhaps they killed him.

Davenoprt eventually finds the key to the case when he learns of Waters' humiliation and persecution of Private C.J. Memphis (Larry Riley), a popular singer/musician from Mississippi whose cornbread lifestyle is an affront to everything the sergeant holds sacred. Waters tells Wilkie: "I don't intend to have our race cheated out of its place of honor and respect in this war because of fools like C.J.!" The steps he takes against this unfortunate soldier eventually set in motion the circumstances leading to his own death.

A Soldier's Story contains outstanding performances by actors who appeared in the original Negro Ensemble Company production. Adolph Caesar's portrait of Waters is a tour de force blend of idealism and misplaced fanaticism. Equally compelling is Denzel Washington's black rage as Peterson. The drama contains a number of parallels to Herman Melville's Billy Bud, but is most effective in its messages about the virulence of racism which makes both whites and blacks the victims of righteous indignation. 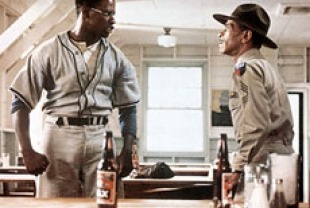 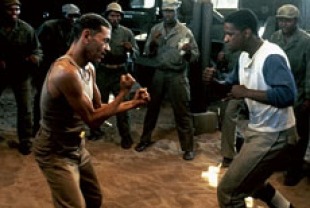