A Sunday in the Country

Directed by Bertrand Tavernier
A bittersweet commentary on the injustice and dynamism of family politics.

It's easy to see why this film by Bertrand Tavernier won the Best Director prize at the 1984 Cannes Film Festival. The drama covers one day in 1912 in the life of Monsieur Ladmiral (Louis Ducreux), an elderly painter who is visited in his country home by his son and daughter. Edouard (Michel Aumont), who is married to a pious wife and has three children, wants desperately to win his father's approval. While he plays the role of dutiful son, his lovely, irresponsible and unmarried sister irene (Sabine Azema) bursts on the scene, shattering the tranquility of the Sunday afternoon with her bubbly energy and personal vibrancy. She, of course, is the apple of her father's eye.

The film's visual beauty is striking, and all the characters are just right. From a luncheon, a doze outside after the meal, a ride in a new car, and a dance in a tavern on the green, Tavernier draws forth a bittersweet commentary on the injustice and dynamism of family politics. Best of all, the director celebrates the unexpected ways artistic creativity can be renewed by catalysts who arrive in a rush and depart just as quickly. A Sunday in the Country is a total delight. 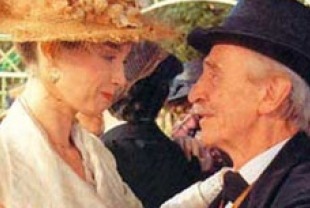