Directed by James Ivory
Weaves a magical spell as an exploration of romance and as a sensitive cross-cultural study.

This film is an exotic pair of love stories adapted from a novel by Ruth Prawer Jhabvala. Anne (Julie Christie), a modern Englishwoman, travels to India to retrace the paths trod by her great aunt Olivia (Greta Scacchi) who left her home to join Douglas (Christopher Cazenove) in Satipur during the 1920s. Unlike the other wives of British civil servants, Anne is intrigued by India and bored with staying home alone. 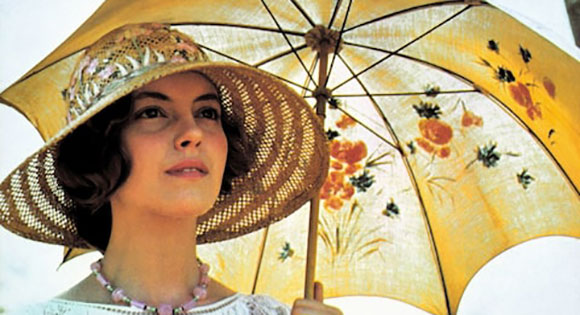 Just as Olivia was drawn into a love affair with a prince (Sashi Kapoor), Anne finds herself fascinated by modern Indians. Inder Lal (Lakir Hussain), the head of the family with whom she is staying, takes her to the different places of Olivia's past. An American hippie (Charles McCaughlan), who is an avid Hindu, tries to win her heart but Inder Lal fares better. Through her journey into the past, Anne comes to terms with her repressed sexuality and a flinty need for independence.

James Ivory directs Heat and Dust with a firm grasp of India past and present — especially the natives' responses to outsiders. Thanks to the finely etched character portraits of Greta Scacchi and Julie Christie, we open our eyes to the manifold mysteries of Indian life. Both as an exporation of romance and as a sensitive cross-cultural study, Heat and Dust weaves a magical spell.

Special Features on the DVD include Autobiography of a Princess, a 55-minute film about Royal India starring James Mason and Madhur Jaffrey, directed by James Ivory and written by Ruth Prawer Jhabvala; and Conversation with the filmmakers, part of a new series of interviews with James Ivory, Ismail Merchant, and Ruth Prawer Jhabvala and Richard Robbins