Directed by Carles Bosch, Josep M. Domenech
An ambitious and well-realized documentary about seven Cuban dreamers who risked their lives aboard homemade rafts to make it to America to forge a new life for themselves.

In the summer of 1994 following the disintegration of the Soviet Union, nearly 50,000 Cubans left their homes and, filled with yearning for a better and freer life, jumped aboard makeshift rafts they had assembled with family and friends and headed for Florida. Many died at sea. Some who were fortunate enough to survive were detained for months at the Guantanamo Bay naval base. They sent videos and audiotapes to loved ones in Cuba from this refugee camp. Thanks to the intervention of various nonprofit agencies, many of them were able to find homes and jobs in the United States. Others relied upon relatives already established in Miami, New York City, and elsewhere as they sought to make the difficult transition from Cuba to a new life in the United States.

A team of Spanish television reporters filmed and interviewed seven Cubans and their families just before they were to make the dangerous quest to America in homemade rafts that summer. This documentary includes that footage and follows its subjects over a seven-year period. The only one who didn’t make it was Mericys Gonzalez who has to return to Cuba after her raft was wrecked at sea. She eventually obtains a legal visa and joins her sister in Albuquerque, New Mexico. Misclaida Gonzalez makes it and settled down in Granby, Connecticut, with her husband Juan Carlos. After five years together, she leaves him for another man and gets caught up in dealing drugs in Albuquerque. Juan Carlos stays in Connecticut and lavishes his love upon a cherished car while working in a gas station.

Rafael Cano carries the dreams of his sister and mother on his shoulders to America. He learns a trade from a relative in Miami and eventually heads out to Nebraska where he makes a home for himself. Following a car accident and permanent disability, he joins a religious commune in Texas and becomes a born-again Christian. Guillermo Armas dreams for years of joining his wife and daughter in Miami and after being detained in Guantanamo, that is exactly what he does. Oscar Del Valle, a sculptor with a daughter in Cuba, on the other hand, finds it hard to sustain his family connections. He settles down with another woman after running into serious financial problems.

Balseros (Cuban Rafters) shows how difficult it is for these refugees to adapt to life in America where they can barely scrape by while working at menial jobs. Hats off to directors Carles Bosch and Josep M. Domench for creating this documentary about a complex and important subject. 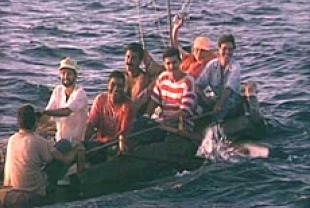