Directed by Robert Pulcini, Shari Springer Berman
Recounts the truly remarkable real life story of a Cleveland V.A. hospital clerk who dared to follow his bliss and wound up as a comic book writer with his own little cadre of antiheroes.

Everybody who was enthralled with Richard Linklater's visionary animated film Waking Life will be equally taken with this innovative movie written and directed by Shari Springer Berman and Robert Pulcini. It tells the remarkable real life story of an ordinary guy who dared to follow his bliss and wound up a comic book writer with his own little cadre of antiheroes. Along the way, the film reveals a lot about the banality and the wonder of everyday life residing just beneath the surface for those with eyes to see and ears to hear.

Harvey Pekar (Paul Giamatti) lives in Cleveland, Ohio, where he works as a file clerk in a Veterans' Administration hospital. In his spare time he writes jazz reviews and collects books and old records. While making the rounds of garage sales, he meets Robert Crumb (James Urbaniak), a greeting card artist who later goes on to success as the creator of a series of underground comics. Harvey begins thinking that maybe this might be the creative path for him to take as well. Only his approach is quite different. Instead of emphasizing superheroes, Harvey focuses on the everyday struggles and achievements of people like himself. Since he can only make stick drawings, he turns to Crumb for assistance with the illustrations. The first issue of American Splendor comes out in 1976.

After two unsuccessful marriages, Harvey meets and falls in love with Joyce (Hope Davis), who is already of fan of his from her job in a comic book store. Their courtship is a hoot and indicative of the awkwardness they share in relating to other people. Suffice it to say, it's a good thing they marry quickly before the magic wears off. They are both immensely pleased when American Splendor finds an audience and some acclaim. A theatrical production enables Harvey and Joyce to watch themselves on the stage. Even better, Pekar is invited to appear on David Letterman's TV show. It turns out there is an audience for his cranky comments on the indignities and challenges of daily life. In one hilarious scene, Harvey cautions against picking the shortest line in the grocery store with an account of being behind a bargain seeking shopper. Despite his growing fame, Harvey keeps his day job. When he gets cancer, Joyce convinces him to chronicle his treatment experiences in the next edition of American Splendor.

To capture the complexity of this antihero, Berman and Pulcini probe his life and work on three different levels. Paul Giamatti vividly conveys the grouchiness, slovenliness, and diligence of Harvey Pekar as the working-class drudge and imaginative artist making his mark. The filmmakers supplement this portrait of the man with interviews in a studio with the real Harvey Pekar and his wife Joyce. In addition, they include sequences from his comic strip and clips from Pekar's appearances on the Letterman show.

Winner of the 2003 Jury Prize at Sundance, the film pays tribute to the creative spirit in us all. There are strange and curious things happening inside us and all around us all the time, if we only take the time to stop and see them. Pekar does, and he introduces us to other eccentrics who do the same. One of his co-workers, Toby Radloff (Judah Friedlander), a self-confessed nerd with a penchant for jelly beans, even has his chance to express himself when the moment is ripe. 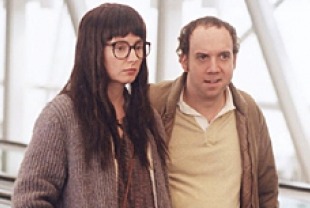