Directed by Richard Linklater
A high energy comedy propelled by the antics of Jack Black as one who serves society by rocking and by sticking it to The Man.

Dewey Finn (Jack Black) loves rock and roll. He is the consummate fan who knows every worthwhile group and song. He is a singer, songwriter, and guitarist in his own band called "No Vacancy." But other members of the group have grown tired of his immature stage antics, such as 20-minute solos and stage-dives. They vote him out and hire someone to replace him for an upcoming Battle of the Bands contest.

Downcast and distraught, Dewey doesn't know what to do. Plus, his usually patient roommate Ned (Mike White), a schoolteacher, is being pressured by his aggressive girlfriend (Sarah Silverman) to make Dewey pay the money he owes for rent or get out. When a call comes in to Ned asking him to serve as a substitute teacher at the prestigious Horace Green Elementary School, Dewey decides to assume his identity and take the job.

Of course, faced with a class of fifth-graders all nicely clothed in their school uniforms, this rocker doesn't have a clue as to what to do. So he tells them to chill out and enjoy some downtime. This scheme works for a little while but then Dewey visits the orchestra class. Lights go off in his head and bingo! -- the new class project is to form a rock band. He decides to teach them everything he knows about rock with lectures on its history, the evils of "The Man," and the essentials of playing rock songs.

Dewey's spirits are lifted when he realizes that there are some talented musicians in the class including Zack (Joey Gaydos, Jr.), the lead guitarist; Katie (Rebecca Brown) on bass; and Lawrence (Robert Tsai) on keyboards. Freddy (Kevin Clark), the class rebel, turns out to be an eager learner on drums, and Tomika (Maryam Hassan) surprises him with her unusual singing talent. The smartest girl in the class, Summer (Miranda Cosgrove), gets her chance to excel as band manager while others serve as back-up singers, special effects wizard, head of security, and the official selectors of the band's name.

Richard Linklater (Slacker) directs this high-energy and spunky comedy which turns out to be an inspired portrait of how the enthusiasm of one person for what he does can inspire the best in those around him. This sneaky moral message is hidden behind the goofy and often over-the-top antics of Jack Black, who shines as the outrageous Dewey. He has to be one of the zaniest substitute teachers ever to hit the screen or the classroom!

The humor quotient of the film is heightened by the funny performance of Joan Cusack as the uptight and unliked principal of Horace Green Elementary School. When Dewey discovers that she is a secret fan of Fleetwood Mac, they are able to connect as friends. The rock fan gets his wish when he has the class entered in the local Battle of the Bands. By the end of this rollicking film, you'll happily be chanting, "For those about to rock, we salute you!"

The DVD boasts some fun extras. One audio commentary gives us a funny Jack Black adding to the observations of director Richard Linklater, and the second lets some of the kids from the film talk about it. The clever making-of feature also is from the point of view of the young actors; it's appropriately titled "Lessons Learned in School of Rock." Finally, the kids contribute a video diary they made at the Toronto Film Festival. Other extras include the trailers and music video of the title song. 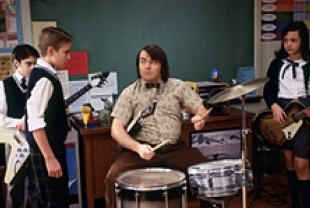