Directed by Jose Padilha
A compelling documentary that dares to tell the truth about the tragic and dangerous consequences of one young man's poverty, exposure to violence, and brutal treatment while in prison.

On June 21, 2000, a homeless man named Sandro Do Nascimento boarded a commuter bus in Rio de Janeiro to rob some passengers and ended up hijacking the bus and taking the passengers as hostages. Police negotiators and SWAT team snipers surrounded the bus while reporters and onlookers watched the standoff unfold before their eyes for four hours. Director Jose Padilha uses video taken for Brazilian television along with accounts by the police, victims, witnesses, sociologists, social workers, and family and friends of the hijacker. Whereas less sophisticated filmmakers would have just stuck with the crime and the commentary of law and order officials, Padilha uses the tragedy as an opportunity to examine poverty and the plight of street people in Rio de Janeiro. This aspect of the documentary explains why it won the Special Mention Amnesty International Award at the Rotterdam Film Festival.

When the hijacker was ten years old, he watched his mother, a shopkeeper in a working-class neighborhood, being stabbed to death. An aunt tried to help him cope but Santo left for the streets where he joined hundreds of other youth trying to stay alive by stealing and panhandling. Many of them sniff glue to numb themselves from the precariousness of their existence and the dangers confronting them. Santo survived the police massacre of seven street children sleeping near a church in 1992. He spent time in prison and later was helped by a woman who gave him a place to stay. But the lure of drugs and danger was in his blood and he returned to the streets.

A sociologist surmises that the hostage situation and the media coverage enabled Santo to step out of the state of invisibility and to be seen and heard for the first time. This angry hijacker holds a gun to the head of various hostages and screams out his demands to the police standing just outside the bus. Although the SWAT snipers have many clear shots at Santo, they are not ordered to do so. Even more amazing is the sympathy of several of the women hostages for the hijacker.

Padilha's compelling documentary is filled with many such surprises, not the least of which is his refusal to sensationalize this sad story; instead he dares to tell the truth about the tragic and dangerous consequences of Santo's poverty, drug addiction, exposure to violence,and brutal treatment in prison. 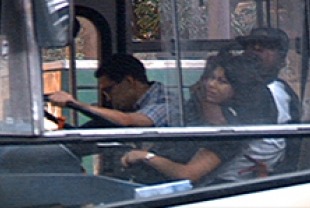